Why Do Trees Hate Me? 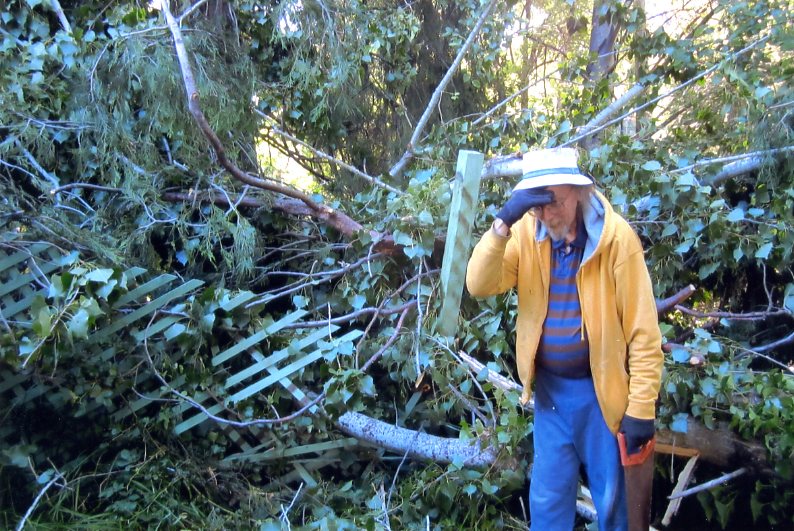 I was looking forward to Father’s Day. I’m caught up on my weekly art assignments and planned on doing a little weed pulling and general dirt therapy in the garden. Alas, my best laid plans always seem to go sideways, sometimes spectacularly.

It started around midnight. I was lying in bed watching Saturday Night Live reruns when I heard a thunderous crash outside. I immediately jumped up and made a hasty survey of the property. The house and garage were intact, and there didn’t seem to be any activity from the neighbors. I figured the noise must have come from out on the freeway, maybe a tree jumped out in front of a drunk driver or something. There are always weird sounds coming from that direction.

At any rate, it didn’t have anything to do with me, so I went back to bed and forgot about it.

Come morning I made a more thorough investigation and, to my horror, discovered that one trunk of a massive cottonwood tree that borders Wolf Creek had indeed given up it’s skyward quest and landed on the embankment, taking out several laurel trees, my blackberry patch, a few of my prized ferns and two-thirds of the lattice I had so lovingly constructed in years past.

It’s become a regular event here in Crabb Hollow. Several years ago, during that pre-Thanksgiving snowstorm, half of the maple tree in the front yard gave way taking out a third of the dogwood tree and a fence. The same storm also brought down several of my neighbor’s liquidambers onto my roof, causing about a thousand buckaroos to fix and leaving me with a slash pile that took the rest of the winter to clean up. I convinced the neighbor to remove the remaining trees, which had been planted thirty years ago to placate my father when said neighbor built a monstrous apartment building ten feet away from our humble home. He groused a bit, mostly because he had been ordered to plant the damn things in the first place and then required to pay the city’s tree removal tax to take them out. (We’re from the government and we’re here to help!)

So after all that I figured I was fairly safe. The leaning cottonwood seemed strong enough to outlive me, even if it did drop the occasional widowmaker. (Took out my grape arbor last year.) And besides, it’s expensive to remove the things. The neighbor paid something like $5K to have his trimmed back with a cherry picker.

So now I’m faced with another massive clean up job. Probably a few hundred trips to the dump to get it off my property. I fear trees now, like the Japanese fear Godzilla. The ominous thumping in the night as the monster approaches, crushing everything in its path. It makes me want to cut down everything over ten feet tall. Or maybe move to the desert.

40 Responses to Why Do Trees Hate Me?