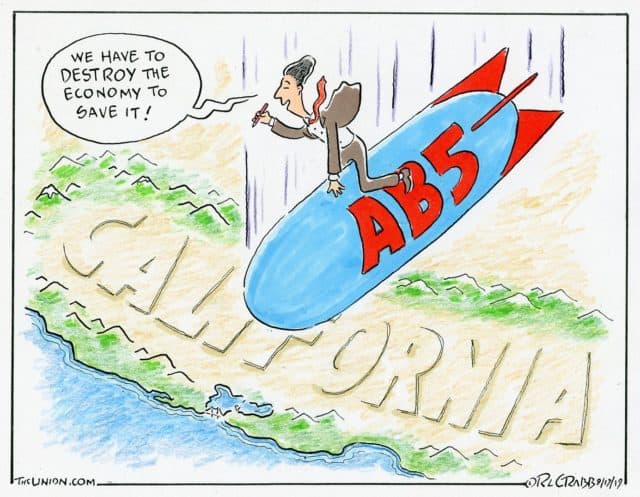 Ronald Reagan once quipped, “Hi. We’re from the government and we’re here to help.” He was being sarcastic, but for many small businesses and individuals that sarcasm was especially well founded this week.

Our legislators, in their infinite wisdom, passed Assembly Bill 5 and Governor Newsom  has signed it into law. As of January, the bill drastically changes who can can be designated as an independent contractor. Freelance journalists, editors, photographers, and cartoonists like myself will now be required to be employees with benefits if we provide more than 35 submissions per year. Currently, I submit 104 during the course of the year.

So why am I complaining? Should I not be grateful to our esteemed representatives for gifting me with additional income and benefits?

I figure there are maybe a dozen cartoonists in California who regularly submit cartoons to small daily and weekly newspapers and are compensated with a small check every week or month. None of us survive on it. It’s just a part of what we do to get by. Most of those publications are barely surviving the shift to online news, which is either free or available for a small subscription fee.

When AB5 is enacted come January, my paycheck will be slashed by two-thirds. Thanks, Democrats.

And the thing that is most galling is the list of workers who will be exempted or given several years to get ready for the rule change. Doctors, dentists, lawyers, architects, engineers, private investigators, investment agents, fine artists, graphic designers, salespeople, realtors, manicurists, electrologists and barbers, among others, will not feel the pinch, for now. I guess the Democrats couldn’t afford to piss off their entire base.

They also put the screws to small studios and record labels, who routinely use sidemen as contracted workers. Many will just go to cash payments under the table, and others will just go elsewhere to record.

That’s not going to fly with most newspapers. So my future with The Union is somewhat up in the air for now. Too bad. I was hoping to go on the road with a new book next year, but I may have to start cutting back on those plans.

If nothing else, this situation reminds me why I changed my registration from Democrat to independent eighteen years ago. Maybe someday those of us stuck in the middle of this war of  halfwit extremist politics will wise up and find a new fair way to govern.

The good news is, with legislation like this, our numbers will grow.

Like Loading...
This entry was posted in Cartoonist Under Fire, Inept vs. Insane, Politics. Bookmark the permalink.

15 Responses to Bombs Away