Inept vs. Insane: Advising the Enemy 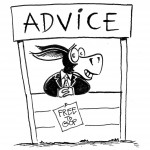 I’ve noticed a disturbing trend in the media lately. In almost every newspaper and blog, Democrats are openly advising the GOP how to avoid getting blown out in the November election. What’s up with that?

Now I know that the Dems are traditionally the party of the downtrodden and voiceless, but giving the Repubby’s pointers on how to win elections? It’s like FDR writing to Hitler and saying, “You know, you really should beef up your defenses in Normandy.”

It’s not like they have to worry about conservatives suddenly seeing the light and endorsing  free gay abortions in the military or anything like it. The Grand Old Party is sticking to its guns, literally, and will do so at least until Thanksgiving, when they’ll either be very thankful or full of stuffing and sitting on a plate. They still own everything east of Sparks to the Ohio Valley and below the Mason-Dixon line, so don’t count them out completely.The turkey may yet gobble.

In California, it’s a different story. Out here the dwindling herd of endangered Repubby’s grumble, write editorials and watch the Democrats transform the state into Californitopia.

And that’s what some Dems are openly afraid of. They’re counting on a good many things going their way, like solar power, tunneling under the delta, high speed rail, cap and trade, and more taxes. If the money doesn’t magically appear, they’ll be forced to slash even more services and there won’t be any Republicans around to blame it on.

They’re counting on lots of income taxes from new rich technokids and the companies they work for, but there’s a reason the new Apple headquarters is configured like a spaceship. It is a spaceship, and when the burden gets too heavy they’ll take off and hover just outside the 200 mile limit. They already do it with their money.

There are some Democrats who understand that unleashing a legislature that already writes hundreds of crazy bills a year and giving them a veto proof majority might not be in their best interests. Even laid back Californians will only put up with so much.

8 Responses to Inept vs. Insane: Advising the Enemy