Inept vs. Insane: The Mocking Dead 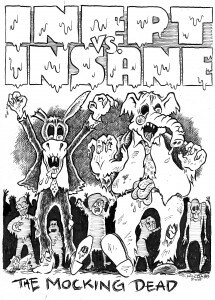 The Great Unraveling of American society continues unabated this week. As promised, the House of Reprehensibles gave a hero’s welcome to Israeli Prime Minister Bibi Netanyahu, who spent the first minutes of his speech praising President Obama, and then raking him over the coals to the final sentence. It was an unprecedented move, clearly designed to derail the nuclear negotiations between the state department and Iran.

But Republicans weren’t done; freshman Arkansas Senator Tom (wish I was in the land of) Cotton took it upon himself to pen a letter to the ruling mullahs of Tehran, warning them in advance that any deal cooked up by Kerry and co. would be dead on arrival in Washington. Forty-seven GOP senators signed the document, another first in the annals of diplomacy. The Senate has now declared itself the chief architect of foreign policy, reducing the executive branch to figurehead status. President Cotton then left to meet with defense contractors to prepare for the inevitable war-to-come.

It was another example of the dysfunction of the federal government, which is now deceased for all intents and purposes. The only thing that matters now is the continuing war of words leading up to the 2016 elections. There will be no permanent solutions to any of the pressing issues confronting the nation, only bandages to stem the bleeding until one side or the other emerges triumphant.

Of course, anyone whose brain hasn’t been eaten knows that this will never happen. We might as well start referring to the old south (and midwest) by their preferred title: The Confederate States of America, a graveyard of dead ideas.

14 Responses to Inept vs. Insane: The Mocking Dead