Another Day Of Conflicting Realities 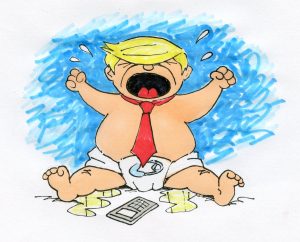 Today should be big victory for the Trump administration, and with good reason. After years of getting fleeced in the trade deal known as SHAFTA…er, I mean NAFTA, the U.S. is finally on its way to an equitable compromise benefiting American workers. Good work, Mr. President.

Unfortunately, Big Baby is skulking around the Oval Orifice because he had to make nice with the McCain family and admirers of the recently departed Senator John McCain. Even the tradition of flying the flag of the fallen at half-staff was ignored until the optics proved too damning.

We all remember how Trump disparaged McCain as a “loser” who got captured after his plane was shot down over North Vietnam and spent the next five years as a guest of the Hanoi Hilton. Broken, beaten and held in solitary confinement, he managed to survive and returned to a nation that had had enough of war. Many never recovered from the pain and insults they endured both here and abroad, but John McCain landed on his feet and went on to win a U.S. Senate seat.

So Trump’s offhand remarks came as a surprise to many, especially when his conservative base shrugged it off as they have done with so many other slights to their usual allies. The Donald crushed whatever moral compass the right claimed to represent. He really could murder anyone in broad daylight still get elected, as long as the agenda moves forward.

Although there were many heartfelt tributes from Democrats and Progressives, I was saddened to see so many nasty posts from the unforgiving radical left. Yes, McCain bombed civilians. Yes, he uttered racist rants. Yes, he got caught up in the Keating Five scandal. He was reckless and too often ready to go to war. He made Sarah Palin a household name.

But he also changed his ways in many respects. I’ll always remember his rebuke to the woman who called Obama a Muslim during the 2008 campaign. It no doubt cost him many votes among the red meat right, but he earned my respect.

On his local blog, George Rebane expects that “left/right polarization will make a quantum leap to a much higher level in the next twelve months, exceeding by far anything we have witnessed to date.” He goes to to say that it is already near to impossible to have a civil conversation with anyone from the other camp.

Well, yeah, when your stated position is that there is absolutely no compromise or agreement with those you consider political enemies, what’s the point of talking about anything, including the weather? When you can forgive a pampered bully president for any crime or stupid remark that you would have crucified his predecessor for, where is any semblance of  honesty or integrity?

When the extremists on both sides finally shoot their wad, it will be up to those who are still standing and ready to forgive the sins of yesterday to begin putting the broken pieces back together. They are the last hope, and if it isn’t too far gone, they will truly make America great again.

Like Loading...
This entry was posted in Culture, History, Inept vs. Insane, Local, Politics, Uncategorized. Bookmark the permalink.

11 Responses to Another Day Of Conflicting Realities