Inept or Insane? You Be The Judge 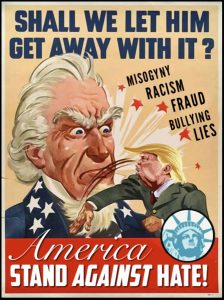 So now come the veiled threats to unleash the cops, the military, and the bikers upon the Enemies of the Republic. Some of these wannabe cowboy vigilantes are developing itchy trigger fingers, egged on by the fucking President of the United States.

The media on both sides are only fanning the spark. Facebook, once a platform to keep in contact with old friends, relatives, and kitty videos, finds itself in the unenviable position of censoring some of the most vile threats and fake news. Inevitably they end up pissing off everyone who gets purged for using a forbidden word or photo.

One of the more popular titles on Amazon is “The Awakening”, a volume filled to the brim with half-baked conspiracies and calls for the faithful to rise up against the Deep State. Some believe that “Q” is none other than the Great Orange Rooster in the White house, sending oblique messages to the troops via hand signals and handwritten clues scrawled onto his notebooks, which are then “carelessly” allowed to be photographed at public meetings. 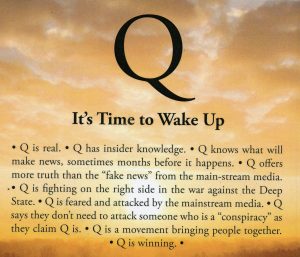 What mad world have we descended into in this Brave Young Century? Is there any hope of reconciliation with such lunacy?

It certainly isn’t coming from the far left, who have jumped the shark into their own fantasy world. They really believe the majority of Americans are ready to rein in the capitalist juggernaut by decimating the insurance and fossil fuel industries, while providing vast new entitlements.

Nancy Pelosi knows better. She’s been around long enough to see big promises dissolve into electoral dust. She may want the same things that Bernie and AOC preach, but she knows that dumping all that expensive and disruptive change onto the Democratic platform in one bloated package is more likely to scare off the independent middle.

And that means four more years of the Trumpublicans, or Q-Tippers, or whatever they are calling themselves this week.

Over at the movie room in the darkest recesses of the White House, Trump and his henchmen gorge themselves on Quarter Pounders and McNuggets while watching videos of Bernie Sanders extolling the virtues of Soviet Russia. There is no alcohol, at the order of El Presidente, but they are all giddy and high-fiving each other at the prospect of a Sanders nomination. Who knows what hidden Sanders videos are being unearthed from the KGB archives, ready to be run on an endless parade of TV ads during the fall campaign?

At this point, smart independents will want to stock up the old bomb shelter and keep their heads down until the crazies kill each other off. The geeks will inherit the earth, or what’s left of it when the smoke clears and the radiation drops to an acceptable level.

Best start buying up all your favorite movies and documentaries on DVD, as the streaming and cable services will be the first victims of the conflagration. We’ll want future generations to remember what humanity was like when we had a functioning civilization.

Otherwise our race may devolve into Herbert George Wells’ subhuman Morlocks, from his classic, The Time Machine. Most science fiction authors do a lousy job at predicting the future, but Wells was spot on, foreseeing world wars, weapons of mass destruction and a backlash against science.

7 Responses to Inept or Insane? You Be The Judge