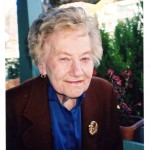 After a rich and fulfilling life, Leone Antoinette Niehaus passed away on June 5, 2012. She was 98. A prayer vigil for Leone will take place at 6pm, Thursday, June 7, at Hooper & Weaver Mortuary in Nevada City, CA. Her funeral will be held at 10:30 am on Friday, June 8, at St. Patrick’s Catholic Church in Grass Valley. Burial service follows at St. Patrick’s cemetary. A reception will then be held at Emmanuel Episcopal’s Frank Buck Hall.

Leone was born on March 8, 1914, in Sauk Center, Minnesota. In 1936, she married Theodore B. Niehaus and they flew to California where Ted was employed as a ranger with the U.S. Forest Service. They lived in Quincy and Challenge before settling in Grass Valley in 1946.

Leone was active in her church, serving as charter president of Our Lady of Grace #206, Young Ladies Institute. Later, she was named “Woman of the Year” by the Catholic Diocece of Sacramento. She was a charter member of Sierra Nevada Memorial Hospital’s Auxiliary. After graduating with the first LVN class at Sierra College, Leone pursued a nursing career at SNMH.

Leone loved outdoor activities, including boating, fishing, camping and golf. Leone had a green thumb and was an accomplished watercolorist. She enjoyed preparing great picnics and lovingly made cinnamon rolls every Sunday. Her outstanding fried chicken and potato salad will be fondly remembered.

Leone was active in many other clubs and organizations including Toastmasters and the Mr. & Mrs. Dance Club. Adevoted mother, she raised five children, finding time to be a Girl Scout and 4H leader.

She and her husband were world travelers. They visited most of North America and Europe, as well as the Caribbean, Hawaii, the Middle East, Australia, New Zealand, and Central America.

Leone is survived by her children, sons Ted Jr., Richard (Mary Regina), Jim (Marlene), and daughter Mary Ann (Bob) Crabb; grandchildren Eli, Heather, Chad, and Clayton; and great-grandchildren Sophie and Oscar. She was preceded in death by her husband Ted and daughter Rosalie.