What’s Up? by Henry Hackett 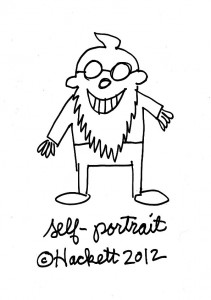 Howdy folks. Henry Hackett here. You may be wondering why there haven’t been any new diatribes by Crabb in a few days. Then again, maybe you haven’t, but I have taken it upon my own self to update the situation.

First off, forgive the crude self-portrait on your right. Since Mr. Arteest hasn’t been available, I was forced to scribble my own version. I ain’t no Norman Rockwell, but I believe I have captured my personality better than I am usually portrayed. I am much more handsome in person.

Now on to the latest poop: After the election, Crabman went into a deep funk. I don’t know why it matters to him, being that he don’t like either party very much. It’s more like withdrawls. Now the countin’s done he doesn’t have anything to bloviate about, so for days he just stayed in bed eating Cheet-os and watching zombie movies. After the munchies ran out he was forced to go to the store and saw that the world had not ended. The sun still come up, the leaves still fall, and there aren’t any roving bands of staggering meatbags trying to take a bite out of him, except in front of the Grand Fathered Inn. In other words, life is goin’ on as usual.

He hasn’t been through as many of these slug-outs as I have. People been sayin’ one or the other side is dead and gone ever since they started doing these elections. We Americans love a good fight, and you can bet that after lickin’ their wounds the losers will be ready for a rematch down the road. It might not be so if the winners kept all their promises and everything worked out just the way they said it would. For all their book learnin’ and charts and projectin’s, reality usually bites ’em in the behind.

Bein’ an old white guy, I’ve seen plenty of change. It’s scary, but you do your best to go with the flow and not sink into stagnant water. And it’s always best to do what you can to weather such floods. They say that hope floats, but it don’t hurt to stock up on life preservers.

For instance, there’s a big brou-ha-ha over the bankruptcy of Hostess. People are swarming into every grocery and convenience store from coast to coast in an effort to grab their last Ho-Ho or Twinkie. I’m ahead of the curve. I started hoarding them years ago during my survivalist phase. When the other idiots were stocking up on freeze-dried lentils, I was buying up cases of Twinkees and stashing them down here in the Skeptic Tank. They have a shelf-life of two hundred years, you know, so they are the perfect food substitute for any prolonged war, drought or financial crisis. . Now I am going to get rich auctioning them off on E-Bay. Who’da thunk it?

Anyways, back to Crabb. He seems to be coming around in the last few days. He turned off the TV and locked himself inside his mancave studio, where he makes up these outlandish stories. It finally occurred to him that that is his calling. There are always new chapters to document before the last ringing of the Great Bell, and his fertile imagination is bubbling back up to the surface. I know. I can smell it.

23 Responses to What’s Up? by Henry Hackett