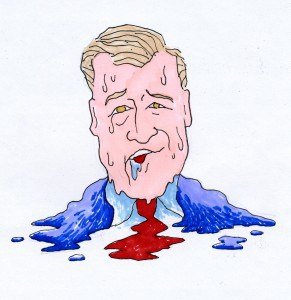 It was sad to see this week’s major media meltdown of NBC anchorman Brian Williams. As everyone who haunts the interweb or stares numbly at a televersion all day knows, Brian was busted for embellishing his account of events in war torn Iraq some years ago. Many people were surprised, but not me. I saw it coming.

You see, Brian and I were bandmates back in the early 80’s. The band was called Bloodass, a group I started with Warren Zevon and John Belushi. Brian was a fairly good guitar player, at least when he wasn’t tripping on mushrooms. Even a drug hound like Belushi couldn’t put up with Williams’ antics, but when they finally came to blows, it was over a woman.

You see, both of them had been carrying on an affair with Maggie Thatcher, but neither knew of the others involvement. ( Maggie was a real vixen. She was also being jackhammered by Lennie Brezhnev, who nicknamed her The Iron Lady. ) When the truth came out, there was a huge brawl that ended when Belushi shattered Williams’ arm with a blood-stained emmy, ending his musical career. There are some who believe that Brian was responsible for Belushi’s overdose, but it’s never been proven.

Yeah, I’d been telling Bri that his stories were going to catch up with him someday, but he was still floating out there in ‘shroomville most of the time. It’s a habit he never quite kicked. If you knew him like I did, you could see the psychedelic glow in his eyes as he tried to decipher the teleprompter on the Nightly News. Most people never did, but that’s because Bri was a pro.

I’ve had similar problems over the years. Being an autobiographical writer is tricky, considering the flaws of human memory. More than once I have recounted some story that seemed as clear and true as the sky is blue only to have another actor in the play tell me that it wasn’t like that at all. Cops and reporters will confirm that it is rare to have two persons give the same account of an event that both witnessed. Even the cameras that we now rely on for accuracy have been known to lie. (Remember Howard Dean’s famous scream that made him look crazy and cost him the Dem nomination? When you look at the same moment from another angle, he almost appears sane.)

It was fortunate when I decided to finish my auto-bio Scablands that I had extensive notes and documents to aid my aging grey matter. Most of the material sat in a shoe box in the closet for almost a quarter century. There were passages that I had completely forgotten about, deleted from my memory during spring cleaning or lost in the fog of substance abuse. It may not be 100%, but it’s as close as I can recall.

And someday, I’ll get around to telling the story of how I was drafted as the field goal kicker for the Oakland Raiders in 1970. It would have set my life on a completely different path, had I not been crippled by the Yakuza sniper’s bullet. But that, my friends, is another story…

6 Responses to Brian & Me