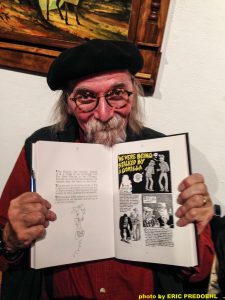 Twenty-eight years ago, I got a call from fellow cartoonist Dan O’Neill inviting me to join a caravan led by the infamous Mitchell Brothers to Aspen, Colorado, to protest the arrest of gonzo journalist Hunter S. Thompson. It took a little nudging and bribery, but I eventually signed on.

And why not? It was an all expenses paid vacation featuring strippers and the opportunity to get a scoop on the story that was making headlines across the civilized world.

The actual events didn’t quite live up to the hype, but it was a chance to document my various encounters with HST during his stint as a San Francisco Examiner columnist and night manager of the Mitchell Brothers O’Farrell Theater on the fringes of the tenderloin.

My chronicle of those times was originally published by Fantagraphics Books, but didn’t see much in the way of sales. It was mostly forgotten until about six years ago when I got a call from Last Gasp publisher Ron Turner, asking if I could send him the artwork for a proposed book by Warren Hinckle. I rounded up most of the pages and sent them in, and then heard nothing for the next three years.

After Hinckle passed away in 2016, I was told that he had, in fact, finished editing the book and that it would indeed be published in late 2017. I really didn’t believe it until I heard the familiar “thump” of a package landing on my front porch in the early days of December.

And what a book it turned out to be! It begins with a 200+ page reminiscence of Thompson’s exploits through the eyes of Hinckle, who was responsible for Ramparts, Scanlan’s and teaming Hunter with illustrator Ralph Steadman, a marriage of talent that would last through both men’s careers. Also included are tributes from Garry Trudeau, Governor Jerry Brown, Will Hearst, Tom Wolfe and many others. It’s loaded with artwork from Robert Crumb, Steadman, Victor Moscoso and S. Clay Wilson.

I’ll be signing copies and telling lies at the Book Seller, 107 Mill Street, in downtown Grass Valley this Sunday, January 28. Trouble begins at 5pm, and will conclude at 7 or thereabouts.

1 Response to Buy This Book