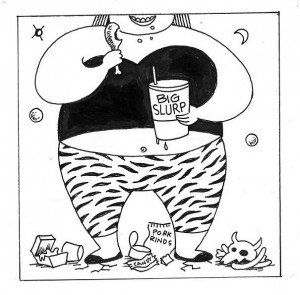 Forget about the Pope retiring, the North Korean nuclear sabre-rattling, the State of the Union, the BIG news of the week is Rex Reed’s scathing review of the new movie, Identity Thief  starring Melissa McCarthy, in which he describes the star as “tractor-sized”, and “a female hippo”. Now I must admit that I have somehow missed most of Ms. McCarthy’s previous offerings until I happened to catch the movie Bridesmaids on HBO last week. Melissa is perfect in the role of the crazed future sister-in-law and made me laugh out loud numerous times through the film.

Be that as it may, Reed showed no mercy to the actress in her latest movie, and his review sparked a firestorm of criticism for mentioning her considerable girth at all. Likewise, there was much debate about a White House physician’s observation that New Jersey Gov. Chris Christie could never fit into the Oval Office due to his weight. Christie’s response was to “shut up” but there is increasing evidence that sea level rise on the East Coast is not due to global warming, but rather that the land mass is sinking due to the added weight of obese politicians. (Russ Steele; take note.)

Obese persons have become the new pariah in the War Against Everything We Hold Dear in Western Civilization. Whenever there is a report about it on the news, we are treated to camera shots of fat people waddling down the street, although we only see them from the neck down so as not to embarrass the individuals. It is a touchy subject.

Of course, the left is on the case, pointing out that obesity is second only to tobacco in the rising costs of healthcare. The same people promote the legalization of marijuana, trying to convince us that pot smoke is medicine. Uh huh. Take a gander at the residue in your hashpipe sometime. That’s what the insides of your lungs look like, especially when you hold the smoke in to get all the THC.

It’s really about revenue. Politicians and their friends see pot/soda/tobacco as a cash cow to fund all kinds of new bureaucracies and the new jobs of the 21st Century. In any properly organized society, they’d just outlaw these things instead of profiting from them.

The real issue is addiction and self-control. If you have more moons orbiting you than Jupiter, it should be obvious that your body mass has created its own gravity field. Likewise, if you can’t walk more than twenty feet without gasping for air, it could be time to quit smoking.

That’s where I find myself these days. I picked up the nicotine habit as a teenager, and even though I’ve managed to kick many other addictive substances (alcohol, cocaine, Demerol) I still battle the cig habit. Ironically, one of the things that scares me is that I’ll quit and turn into a blimp. My dad quit at about the same age I am now, and gained 100 lbs. (His nickname used to be Slim.)

So I’ll continue to fight the urge to inhale smoke and whatever bizarre concoctions the fast food industry throws at me. (Have you seen the commercial with the sexy babe on the beach eating a dripping grilled something-or-other? Who’s looking at the sandwich?)  And I expect to be criticized for my shortcomings. There are no sacred cows. We all get roasted, and rightfully so. Rex Reed is a jerk, but one thing you’ve got to say in defense of Melissa: she didn’t get famous on her looks. Can you say the same thing about the Kardasian crew? Maybe I’ll go see Identity Thief, but hold the super-sized popcorn and soda.