State Of The (Local) Union 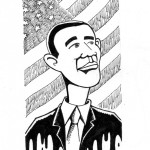 After watching the President’s speech last night, I decided to present my own observations on the state of the economy, at the local level.

Over the weekend, I saw at least five individuals standing on the side of the road begging for money, and another standing next to his car with a cardboard sign that read, “out of gas”. We had our last supper at Villa Venezia (my fave restaurant) which is closing along with Trolley Junction and Cirino’s. I have heard that the pink slips are flying at Grass Valley Group. The Union police blotter has numerous instances of people arrested for shoplifting food from local markets, and reports that Grass Valley has seen a 62% increase in burglaries. Mental health services are being overwhelmed by depressed unemployed people.

I am reminded that our community is better off than many. Just down the road in the valley, things are much worse. So this is the economy wrecked under Bush and perpetuated by Obama. The Prez has all kinds of great programs in mind to fix things, if he can only find the money and get the Repubbys to go along. Fat chance of that happening any time soon.

In the meantime, the Dems think people should have to pay more money to insurance companies for gun liability, and they think we should all pay a lot more for energy. ( What would $5 per gallon gas do to a tourist economy?) Come the end of the year, everyone who still has an income will be forced into Obamacare, and companies are cutting employee hours to stay solvent. Look for more layoffs if the minimum wage goes up to $9. Fortunately, the state and federal governments are now flush with cash from the newly enacted tax hikes. Unfortunately, it will never be enough to satisfy their voracious appetite for spending.

Well, the Prez has his work cut out for him. If the local economy is any indication, it’s going to be a long four years.

94 Responses to State Of The (Local) Union