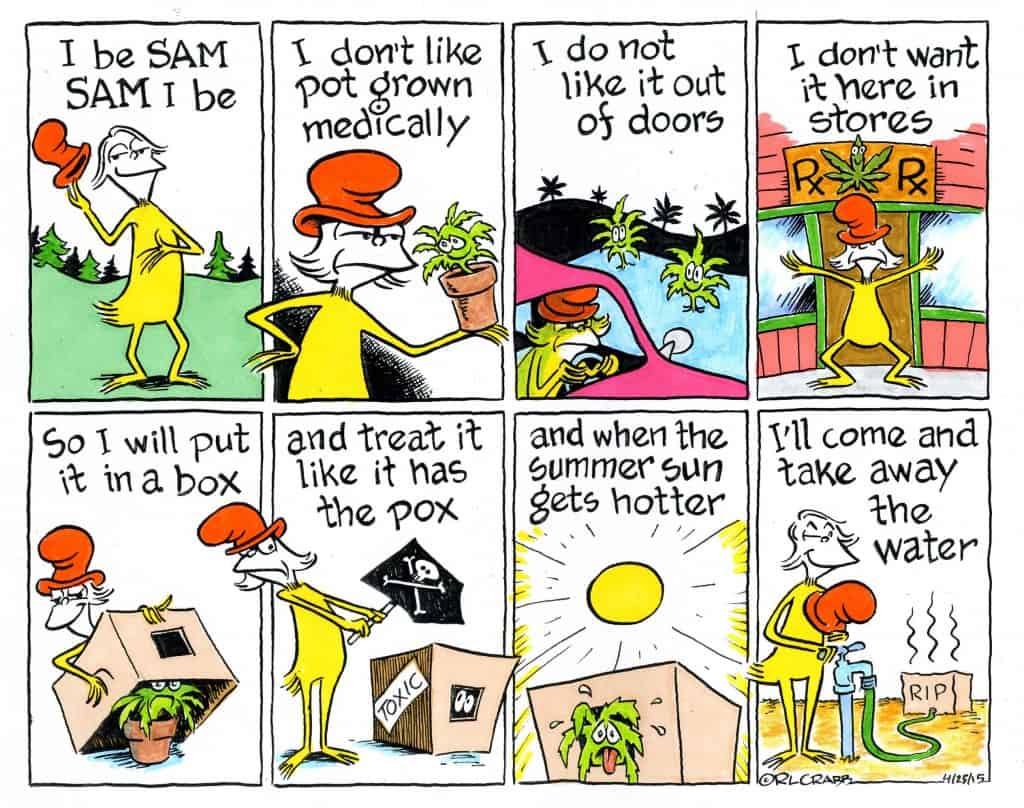 SAM (Smart Approaches to Marijuana) is a national organization that professes to be seeking honest solutions to the proliferation of medical marijuana gardens in rural areas. Locally, they spent a lot of time working to defeat the compromise marijuana growing initiative on last November’s ballot. (Measure S) They were successful, and now, giddy from the sweet taste of victory, they have decided to attempt banning ALL outdoor gardens in the county, using the drought as an excuse. (They have been encouraged by similar efforts in neighboring Yuba County.)

It’s a ruse. The local committee is a stacked deck of right wingers looking for any chance to shut off the flow of marijuana, medical or otherwise. What they will accomplish is to drive production back underground, where it has flourished for the last forty years. Look for more grows on federal land, and more water diversions. Should keep Sheriff Keith Royal and the boys busy until late fall.

Just when marijuana advocates thought they were in sight of achieving their goal of legalization and a modicum of respectability,  “straight” rural residents have risen up in opposition. The neighbors are uncomfortable with cyclone fences topped with razor wire, vicious guard dogs, and the skunk smell that permeates their outdoor activities. And there’s always the chance that outlaws will try to heist the fall crops.  Nevada county has a history of armed altercations involving marijuana. The real victims are the legitimate prescription holders who will now have to scramble to find their medicine.

But like I said, the industry has flourished for decades, despite the threat of jail or robbery. Do the people who want to shut it down think they are going to make a dent in production? If so, I’ve got a bridge on Maybert Road I’d like to sell you.