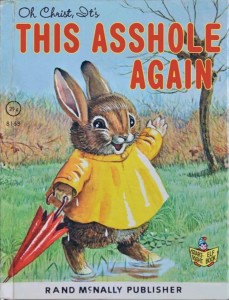 Some of you may have noticed an item in the news concerning the “Furries” or to be more specific, the gassing of conventioneers at the Midwest Furfest in Rosemont, a suburb of Chicago. Some terrorist popped open a cannister containing chlorine at the con, resulting in nineteen attendees being taken to the hospital, or perhaps the vet. The reports weren’t clear on that detail.

So you may be asking yourself, WTF is a furry? I’ve been familiar with this cult ever since I started drawing funny animal comics back in the eighties. The furries are fans of anthropomorphic characters; animals with human traits or visa versa. Their numbers have grown since they first appeared, and now have their own conventions outside the mainstream of comicdom.

Although they are obsessed with fantasy, they take their “reality” and themselves quite seriously. At a gathering called PetuniaCon in 1984, I was sitting at a table with Diane Valentino, wife of Jim Valentino, who was the author of a comic book series called Normalman. The series was a spoof of the various genres popular in the comics scene at that time. One of the issues featured a storyline called Smelfquest, which parodied a popular comic called Elfquest, combining it with the ever-popular smurfs.

A young girl adorned in green elfwear and fox ears approached the table, but upon seeing the Smelfquest comic her cheery elfin persona was replaced with a withering scowl. Her hands were shaking as she pointed at the offending comic and shreiked, “I-I-I don’t see that!!! No No No!!!” You don’t mess with people’s fantasies.

I instinctively grabbed a folding metal chair, thinking I might have to whack the little green person before she leaped across the table and attacked Diane and myself, but fortunately she was led away by her companion, who was dressed as a dog, or maybe a wolf. It was hard to tell.

During my time as the author of Junior Jackalope, I had many dealings with the furries. For the most part, they were as harmless as your basic domestic pet, but on occasion they would show their fangs. Not wanting to have to go through the ordeal of rabies treatments, I eventually dropped Junior and started writing stories featuring rock musicians. The groupies weren’t as hairy.

5 Responses to The Fur Flies