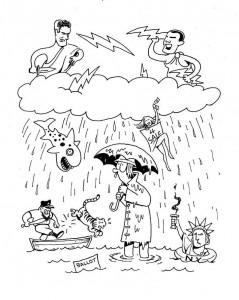 It’s Monday already? The time seems to fly when there’s so much going on in the world. Let’s take a look at some of the highlights…

Life of Gi: San Francisco put on a textbook performance on how to win a World Series. The Tiger got kicked off the boat. To celebrate, everyone in The City will get naked.

Cloud Sandy: If the election picture wasn’t muddy enough, an Atlas-sized cloud has effected a merger with a descending cold front, threatening to soak the entire east coast. Both candidates have canceled appearances in the predicted disaster zone. Romney, not wanting to mess up his hair, has moved westward to sunnier prospects. Obama will be on the front lines, directing relief efforts and trying to look presidential after blowing it in Libya. No one knows how the Big Storm will affect turnout, but expect dangling chads to be replaced with armies of election workers armed with hairdryers and wads of soggy ballots. If things get too dicey, Obama can call in the Marines, who should be ready for anything after training all week for the Rombie Apocalypse.

Who’s on First?: In Brazil, a twenty-year old woman has successfully auctioned her virginity online for $700,000+, which could usher in a new era of prosperity for the world’s oldest profession. Most prostitutes endure years of employment, just to feed the kids and keep the pimp off their backside. The new paradigm will allow them to work once and retire. Maybe that’s what that woman in Afghanistan was thinking when she beheaded her daughter for refusing to sell herself. Money does strange things to people, especially when sex is involved.

The Rest of the West: As if to protest all the attention being given to the east coast, the Pacific Rim let loose with a massive earthquake. Fortunately, it missed the U.S. and only shook up some bears and beavers in British Columbia. A rather wimpy tsunami evoked a hang-loose-ho-hum in Hawaii. But in California, golfers were shocked when a spotted shark fell from the sky. Some felt it was a harbinger of a biblical holocaust, others blamed it on climate change. Animal control officers managed to wrestle it back to the ocean before PETA could file a lawsuit. We have enough sharks here, thank you.

Spoiler: If you haven’t seen the movie, read no further. The part of Barack Obama was played by Halle Berry. Mitt Romney was portrayed by Hugh Grant. And Tom Hanks, as the Beaver.

10 Responses to The Monday Muse