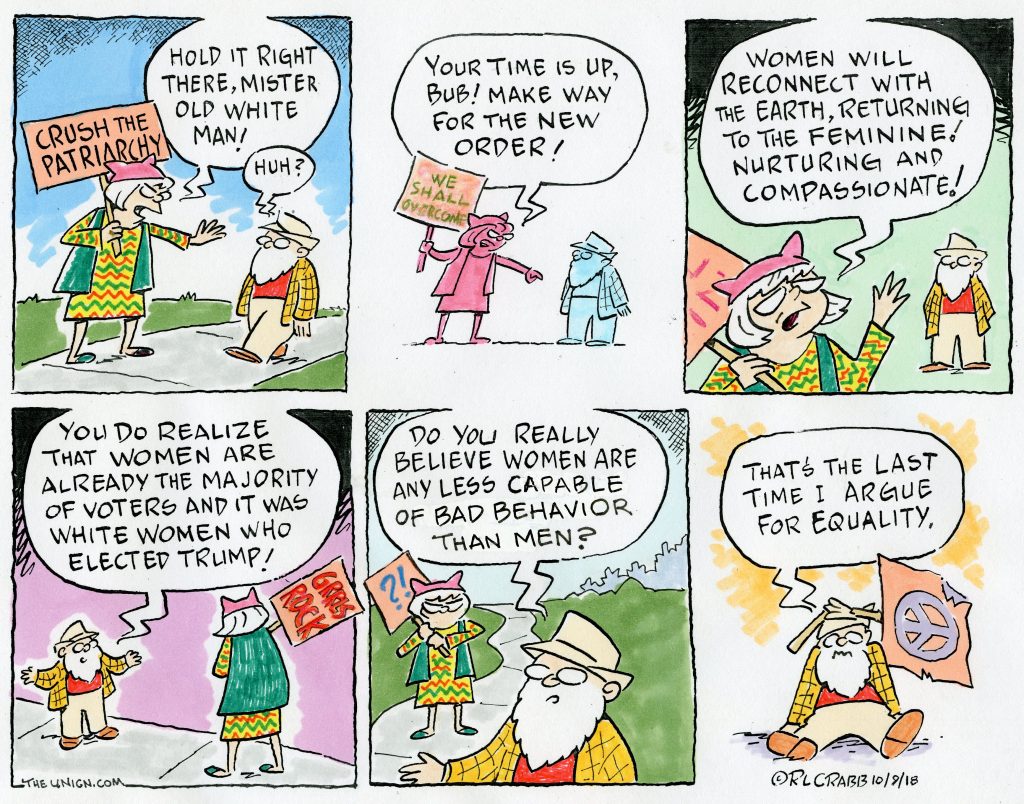 Equal rights? Yes. Equal compensation? Of course. Equal justice? Absolutely. Equal intolerance? Not really a good strategy. I applaud women standing up for themselves. #MeToo was long overdue. But will the anger rally the righteous to victory, or recharge the reactionaries?

The urge to punish anyone who supports Trump and his henchmen in Congress is a double edged sword. As Bill Mahar pointed out last Friday night, women need to be heard, but they don’t necessarily need to be automatically believed. We are still a nation of laws, not men, and “not men” does include women, believe it or not.

Judging by the numbers in the 2016 election, a large number of white women didn’t get the memo that they were voting against their best interests. It brings home the reality that women are subject to the same human nature as we males. They won’t vote like they’re told any more than we will.

If the goal of this revolution is to disrupt the status quo, the best way to do it is through the ballot. Women already have the Democratic party behind them. What they need are the undecided independents. When they see Brett Kavenaugh as their husband, brother or son, they are not going to vote blue. When they see Republicans and their families being run out of restaurants and threatened with violence, they likely see anarchy, and anarchy doesn’t fit with most people’s idea of civil society.

Anarchy means tanks on your street, and you already have problems finding a parking space. Anarchy means shortages of everything, unless you have a well stocked bomb shelter. Anarchy means no TV or internet. Good God! You might as well be blind and deaf!

We haven’t gone there yet, and we aren’t even close to the kind of shit storm the nation endured in the sixties. If you were born after 1970, you’ll have to take my word for it, or maybe read some history. Americans weren’t too keen on “the revolution.”

Martin Luther King had a better idea, even if it was less satisfying in the moment. Put down the big stick and use reason against the unreasonable. Projecting hate will only encourage more hate, and reasonable people are afraid of hate and the violence that is sure to follow. Don’t become the thing you are trying to destroy.

4 Responses to The New Grrrl Order