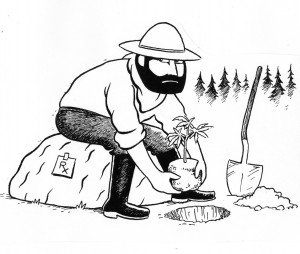 There’s a lot of friction in Nevada County this fall, and it all revolves around the medical marijuana (MMJ) initiative (Measure “S”) on the November ballot. You would think that after eighteen years most of the bugs would have been fixed, but then you have to realize that we are in California.

When originally approved by voters, the law was intentionally vague enough to be amended as circumstances arose. The legislature passed the buck off to the local jurisdictions. That in itself is amazing. This is a state where you have to get a certificate to get a job as a dishwasher, but you can grow medicine in your backyard without any kind of license or permit other than a prescription from a doctor. No testing for quality control or dosage. It’s up to the patient to determine how much to ingest and in what form to ingest it.

Mind you, I’m not complaining. We could all do without more government meddling, but products such as concentrated honey oil and edible confections should be consumed with care. Long before the current disagreement, the cities of Grass Valley and Nevada City rejected the idea of dispensaries within their boundaries, and growing is a no-no.

So all the gardens are located in suburbia, on private land or the national forests and state parks. People who moved to the country to escape the ills of civilization find strange people moving in next door with guns and dogs and razor wire on the fences. Hikers and hunters fear running across illegal grows in the deep woods. Mexican cartels have found it easier to grow where the customers live. (Some people accuse me of racism for that claim, but when you find a deserted camp well stocked with tortillas and beans you can pretty much figure its not Norwegians. Should I call them undocumented grows rather than illegal ones?)

This area has had a rep for Mary J for forty-odd years. In 1972, I moved to Atlanta, Georgia with my pals Charlie and Doc. When we arrived we landed on Peachtree Street, the Haight Ashbury of Atlanta. While I was wandering around a head shop, I noticed a poster on the wall. It was a picture of a burlap sack with a big marijuana leaf on the label. At the bottom it said “Grass Valley, California.” It actually took a few more years before MJ would become a major crop in Nevada County, but we did have the climate and open space required. And yes, marijuana helped more than a few businesses survive the malaise of the late seventies, and kickstarted a few more in the eighties.

Lost in all this are the folks who are really trying to make MMJ work, and those whose pain and suffering are soothed by the magic plant. The possibilities for new treatments are many, if society can overcome a century of reefer madness. No one knows how many people have legitimately been helped, because no one wants to share the information in the climate created by law enforcement. If a compromise can’t be reached, Big Business is ready to swoop in and corner the market when the hammer falls on individual growers. Are you ready for Monsantajuana plantations?

Proponents are already gearing up for another shot at outright legalization in 2016. My guess is it will pass because the urban folks who consume most of it will vote for it. The rural areas may be another story.

6 Responses to The “S” Mess