Mary Fleener is one of my all-time favorite artists. We both cut our teeth in the comix biz back in the eighties, and both of us were in what I called “the class of ’69”, cartoonists who graduated from high school right into Woodstock and Altamont. Another alumni of those years was a totally outrageous woman named Dori Seda. All three of us did autobiographical stories, mostly about our deranged experiences growing up during those formative years. Sadly, Dori’s lifestyle caught up with her too soon.

Mary grew up in suburban Southern California, a surfer girl with a wicked sense of humor and an eye for color. She describes her style as “cubismo” and is heavily influenced by Picasso. Her acrylics and comics are highly regarded all over the world. 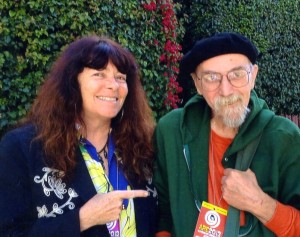 In recent years, Mary has been doing a political comic strip  called The Less You Know, The Better You Feel in the sleepy coastal community of Encinitas. Wait…Did I say sleepy? Hah! Small town politics in SoCal is anything but boring. Graft, corruption, backroom deals are the staples of her artistic diet. With the price of real estate on the coast being what it is, there is plenty of competition for unscrupulous developers and politicians looking for handouts.

So we ’69ers have followed a similar path once again. Two cartoonists trying to make a difference in our own backyard. In doing so, both of us have found that those we used to naturally ally ourselves with can be overbearing authoritarians as much as the “establishment” we used to deride. Sometimes you have to ruffle the feathers in your own nest.