Rights Of The Living Dead 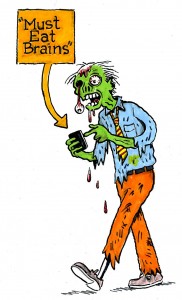 All Hallow’s Eve is almost here, which means that the dead will walk among us once again. In light of the current trend toward inclusion, we must grapple with how the undead are treated by us, the living. Are zombies human beings? Do they have rights? Who are we to judge them? Are they entitled to afterlife, liberty, and the pursuit of happiness?

There are many questions. For instance, if Uncle Willy gets zombie-chomped and realizes that he will soon become a drooling, mindless creature from a B-movie, will he change his will to use his “life” savings to maintain his condition in comfort? Will he still be eligible for social security, disability and medicare? If the politicians in Washington think they had a problem with those programs going broke before, they’ll really freak out when millions of Willys eat up every nickel in the trust fund.

Discrimination: In this politically correct atmosphere, is the word zombie a slur? Would it not be better to address them as the life-impaired? Being that their mental condition is, shall we say, limited, would they have the right to convalescent care like dementia and alzheimer’s patients? We certainly don’t stick a crowbar in Uncle Willy’s forehead when he can’t remember where the bathroom is.

Can you marry a zombie? Or if you were married to someone who becomes a zombie, would the “in sickness and health” clause still apply? If you decide to divorce, would community property laws be upheld?

What about driver’s licenses? Jury duty? Do you want zombies in the school shower with your daughter? And being that the zombie’s mission is pretty much restricted to eating the brains of the living, where can we incarcerate all these potential Jeffrey Dahmers? In California, we don’t even have room for living criminals.

Politics will play heavily in a zombie world. Compassionate Democrats will see a chance to increase their influence. It’s not like the old days in Chicago when the dead voted through surrogates. Now they can lurch into the booth by themselves. Liberals will shower them with programs and free brain lunches as long as they can make an “x” on a ballot.

Conservatives, on the other hand, will fight the zombies, on religious grounds if nothing else. There is only one dead man walking as far as they are concerned. And besides, they’ve been preparing for the offal to hit the oscillating fan for decades. They’ll finally have a reason to use those storehouses full of AK47’s and grenade launchers.

So it will be tough times for zombiekind, until the Supreme Court rules one way or the other. If there is one group that will profit from the coming apocalypse, it will be the lawyers. They are already used to the smell of rotten clients.

22 Responses to Rights Of The Living Dead