Inept Vs. Insane: The Beginning That Never Ends 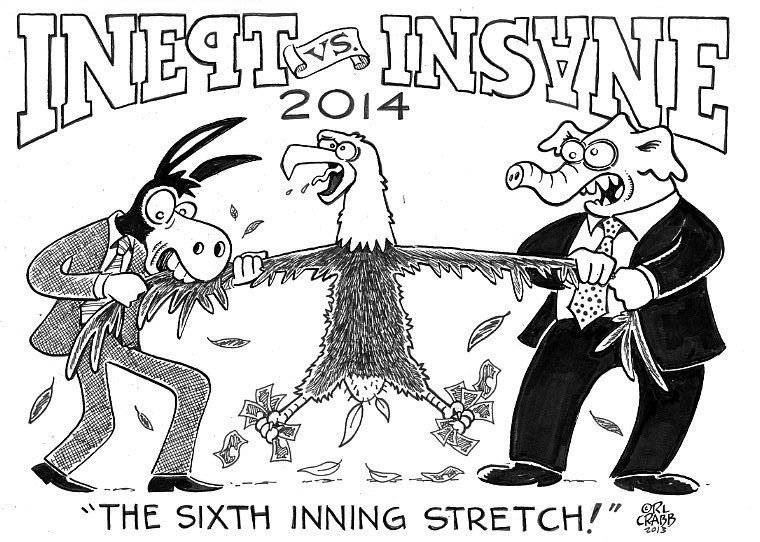 Yeah, I know…It’s only October, so why am I posting my campaign logo for 2014? Because unless you’ve been living in a hollow log, you may have noticed that the midterm races have begun in earnest. Candidates are shaping their message and raising the mountains of cash needed to win elections. Also, it seems appropriate since we just passed “National Baloney Day”. The politicians are full of it, and nobody wants to watch how it’s made. But, like a motorist passing a grisly wreck, we can’t really help ourselves from peeking.

The best way to make a name for yourself is to passionately disrupt the order of business by engaging in the time-honored tradition known as filibustering. This tactic guarantees maximum press coverage and gives the politician a platform to do what they do best; blab like a lunatic and accomplish nothing. There have been two high profile examples this year. First, Wendy Davis’ longwinded defense of abortion rights and cruel budget cuts in the Texas legislature. No one outside of Austin knew her name before she donned a diaper and did the Davy Crockett last stand, but now she is seen as the Great Blond Hope of Democrats to take back the Governor’s mansion from the evil Republicans.

The other example was, of course, the quixotic and bewildering performance given by Texas Senator Ted Cruz. Ted isn’t actually running for anything in ’14, but seized the opportunity to grease the wheels for a presidential run in 2016. Could any upstanding tea partier listen to his rousing rendition of Green Eggs And Ham and not think that he is the messiah they have been waiting for?

It has not been a great year for Obama & Co. Foreign policy is just that: foreign. It was bad enough when they were outmaneuvered by the thuggish Putin, but now Virile Vlad has engineered a deal that makes oil-for-food look downright respectable. He calls it chemicals-for-lead.

Meanwhile, the leaders of all those nations we count as friends are furious over the recently leaked revelations of international eavesdropping, even though it’s taken for granted that we do it to everybody and always have. We know what goes on a pizza ordered by Angela Merkel, and how many robocalls for carpet cleaning were received in Saudi Arabia. Will the press label it Snoopgate or Watertap?

Desperate for any distracting victory, the president is now courting the new old government of Iran, while his  drones roam the planet like hungry vultures, snuffing out evil and whoever else is in the vicinity.

And speaking of Obamabombs, the Affordable Care Act fizzled on launch day, and armies of techies have swarmed over the Big Computer to tighten the bolts and replace the hoses and tubes. It will only cost a billion or so to set things straight.

The economy staggers on, and even the most optimistic numbers must be tempered by the fact that many have just given up looking for work and replaced their credit card with plastic food stamps. Wall Street continues its shell game unabated, backed by Uncle Ben’s printing press at the Fed. Many investors and small businesses nervously keep both hands on their wallet, not knowing when the next pocket-picking by the federal or state revenuers will occur.

In this atmosphere, one would think that the electorate would be anxious to boot these inept bureaucratic boondogglers out on their ear. But then you look at the alternative.

4 Responses to Inept Vs. Insane: The Beginning That Never Ends