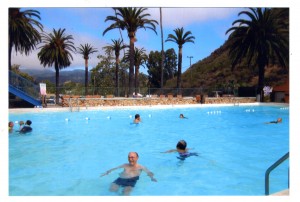 The first thing I did when we decided to visit the central coast was google up the location of the nearest hot spring. I have bad legs, and one of the best remedies I’ve found for the problem is hot mineral water. I was in luck. Avila Hot Spring was just a twenty minute drive from Morro Bay, so it was the first place we visited after settling in.

The facility was perfect for me. I don’t really care for the new age pretentiousness of some hot springs businesses. Avila was anything but that. It is an older, somewhat funky place with an olympic-sized swimming pool with 86 degree water and a smaller two-foot deep soaking pool at 102 degrees. The spring itself is not exactly natural. It was unearthed by a pair of wildcat oil drillers in the 1800’s looking for oil. There were swimming classes for the kiddies and we even saw one group in full scuba gear learning the finer points of breathing underwater. There were many languages being spoken in the soaking pool; Japanese, Spanish, German, Italian and another I didn’t recognize but could have possibly been Klingon.

Just a stone’s throw away from the hot spring was the Avila Valley Barn, a farmer’s market in a barnyard setting. Lots of overpriced yuppie canned goods, but very nice and reasonably priced produce. We picked up some fruit and headed down the road to the city of Avila Beach.

After a picnic at the beach, where I received a nasty sunburn, (note: always remember to carry sunscreen.) we headed into town for some recreational shopping. There was something odd about Avila Beach. Unlike the other coastal towns, Avila was bright, shiny and new. After a few inquiries, we were reminded that the town had been the victim of a horrendous oil spill, which was discovered in 1989 by a local resident who was digging a basement and hit oil. The problem was caused by a leaky underground pipeline from the UNOCAL refinery on the hill above town, and had been spewing toxic materials into the ground since the seventies.

After years of wrangling and lawsuits, UNOCAL agreed to level the town, dig up the contaminated soil and rebuild the city. They did a nice job, but today the town of Avila Beach is a reminder of why people have a love/hate relationship with the oil industry. (And just a mile down the road are the heavily guarded gates of the Diablo Canyon Nuclear Power Plant, but that’s another can of glowing worms.)