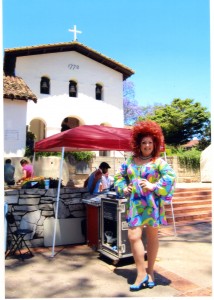 Mary Ann was raised in the true Catholic tradition, so whenever we are on the coast she is drawn to the Spanish missions that launched Western Civilization in Olde California. After our morning dip at the hot springs, we headed into San Luis Obisbo to seek out the ancient adobe chapel.

Being that it was Sunday, we expected to find the usual crowd of pilgrims there for mass, but what we encountered was something else altogether. There was a huge rainbow archway made out of balloons at the entrance to the mission plaza, and the pilgrims were of a different stripe.

What we had stumbled into was the 16th annual Central Coast Pride, a gathering of gays, lesbians, transvestites and other alternative lifestyle supporters. There were booths selling rainbow attire for all occasions and music by gender benders with Fenders from around the area. We made our way to the museum and chapel, which were almost empty of the lines of tourists one usually bumps into at the missions. Not too surprising, really. Imagine you’re a devout Catholic from Kansas, come to see the birthplace of your religion in the Americas only to be confronted by some guy wearing a moo-moo and stiletto heels. Definitely an experience you won’t be relating in Sunday School when you get home!

Next: Castles and Crackpots