Vacation Part four: A Man’s Castle is his Home. 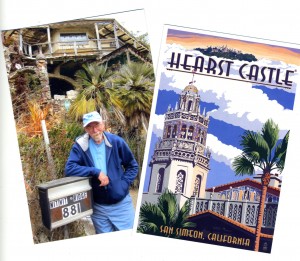 I have always had a soft spot in my heart for William Randolph Hearst. Yeah, I know he was a manipulative power broker who occasionally used his media empire for evil purposes, but he was also a big supporter of comic art. He gobbled up the cream of the cartoonist crop in the early 1900’s and ran their strips in his newspapers. WRH was especially fond of a quirky comic strip called Krazy Kat by George Herriman, even though his editors hated it and his readers didn’t understand it. Today, “Krazy” and “Ignatz” are considered the finest example of the medium and treasured by collectors and cartoonists alike.

Hearst’s country retreat, La Cuesta Encantada, is his other crowning achievement. Julia Morgan must have felt like a crack addict who stumbled on to a mountain of pure rock cocaine when WRH hired her as his architect. No expense was spared in the building of his lavish estate, and it still draws thousands of visitors from around the world.

And why not? Many come to look upon the treasures that once resided in their own countries. We toured the main house on our last visit, so this time we checked out the guest houses and kitchen. These rooms are no less extravagant, filled with tapestries, paintings, oriental rugs, and everything is covered with gold leaf. The wooden beds are immense, with posts as big as telephone poles and covered with intricate engravings done by long-dead craftsmen. We finished the tour at the Roman pool. Someday, I want one just like it in my backyard.

Just down the road in Cambria stands another castle, not as oppulent but just as eccentric. This one belonged to a local garbage man named Arthur Harold Beal, who used the discarded items he collected on his daily rounds as well as driftwood, seashells and materials found on his property to constuct his hillside palace. He was known by the locals as “Der Tinkerpaw” or “Captain Nitt Witt”, hence the name Nitt Witt Ridge.

Beal died in 1992, after working on his castle for more than six decades. New owners offered tours for awhile, but when we arrived the property was surrounded by a cyclone fence and the building was in a state of disrepair and decay. The gardens were overgrown and dead weeds covered some old toilets that Beal no doubt intended to incorporate into his work of art. A damn shame.

If any enterprising individual tried to create such castles today, he or she would find a much different environment. The rich man would buy his way through the planning process, but the garbage man would be out of luck. Even if he could navigate through the gauntlet of concerned neighbors, the permits and regulations would strangle his dream. He’d be forced to install sprinklers and aim his castle at the sun to comply with the state’s solar mandates. They’d tell him what colors he could adorn his dwelling with and what materials are acceptable to the state.

A few rugged individuals still flaunt the rules, but their castles are hidden deep in the forest, away from the all-seeing eye of Big Brother. Most will get caught eventually, and either fined into insolvency or forced to destroy their dreams. A damn shame.

8 Responses to Vacation Part four: A Man’s Castle is his Home.