Yes We Con – Day Two: The Blond Leading The Blond 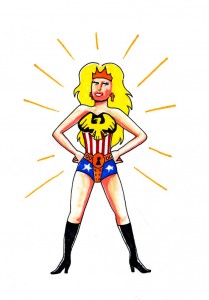 Back in the days when I prowled the backroads of Eastern Washington, I visited the little town of Roslyn, where they were shooting the TV series Northern Exposure. There were no camera crews there, but all the familiar landmarks stood out like a Hollywood set. We had a beer at The Brick, and I scribbled a cartoon on the bathroom wall. (Unlike most bars, this was a tradition. Everybody signed their name.) You could see where they pasted a “s” onto the wall of the Roslyn Cafe, to make it appear to be a business owned by Roslyn rather than the name of the town. The paved streets were covered with brown mud to simulate dirt roads.

I had been hoping to see Janine Turner, who played the part of feisty bush pilot Maggie O’Connell. I had a crush on her back then, like a lot of single guys. Janine fit the part well, and it was no doubt the high point of her career.

At least until Tuesday night in Tampa, when the actress turned radio commentator took center stage at Republic-Con 2012. The cute young brunette is now a middle-aged bleached blond, who spent her big moment spouting cliche’s and GOP talking points. She even drug out Benny Frankin’s warning about getting a republic, “if you can keep it.” Oh well, I suppose that’s what happens to conservatives once they’ve been outed in Tinseltown.

And what is it with the blond women and Republicans? Watching on C-span as the cameras would pan through the crowd, I swear at least 75% of the women were yellow hairs. When the blonds from Fox News arrived, it started to look more like a Barbie impersonator convention. After a while it gets hard to tell them apart. Was that Martha McCallum? No, it was Molly Henneberg, or maybe one of the Heathers.

Sure, you’ve got your Mia Love, Nikki Haley and Michelles Malkin and Bachmann, but they are outnumbered by Laura Ingraham, Ann Coulter, Peggy Noonan, Kathleen Parker and a million others. A lot of them are also attorneys, which explains the sharpened teeth.

But the queen of the prom last night was Ann Romney. A lot was riding on Ann’s performance, given all the media hype and her designation as “Mitt’s secret weapon.” She played her part well, coming off as a sincere but well-rehearsed motivational speaker/evangelist, extolling the many hidden virtues of her life’s love.

The entire evening was spent attempting to put a human face without make-up on the GOP, and with good reason. Democrats have portrayed the blond army as the embodiment of the Stepford wives, lulled into a life of housework and child-bearing for the unscrupulous businessmen.

“Welcome to our gated community, Judy. Come join us at the the tea party. Your vaginal probe awaits you and then we’ll have you fitted for your new chastity belt.”

But after the blondfest was concluded, the real meat of the evening was delivered by New Jersey Governor Chris Christie. The imposing Christie is a bare-knuckle brawler who shoots from the hip and gives good speech. There were many in the room who secretly wish it was The Guv on the top of the ticket to face off with Obama in the coming debates. Like in the movie Rocky, the GOP wants a fighter who can knock the stuffing out of the obnoxious Apollo Creed. No one is sure if Romney is truly their Great White Hope.

19 Responses to Yes We Con – Day Two: The Blond Leading The Blond