Yes We Con – Day Three: The Voice That Launched A Thousand Search Engines 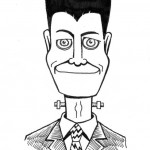 We Americans are well known for our short attention span. It’s hard to stay focused when you are hard-wired into the tsunami of information spewing out of the big plasma screen in your living room or the dinky one in your pocket. There are news flashes and updates every nanosecond as millions of professional and amateur journalists jockey for the Big Scoop that will catapult them into the viral void of fifteen second fame. A person could spend 24/7 trying to view every cute kitty video on Youtube and never get past the calicos, much less the terrible tabbies. With all this input, you need a good hook to keep your audience coming back for the next episode of your mini-series.

So it goes with Republic-Con 2012. By the third chapter, you want to see some progress in the plot, some bizarre twist that will make you exclaim “I didn’t see that one coming!” For the women, it’s the romantic angle, and unfortunately King Newt was written out of the script before he could behead his third wife, and Ann Romney did the gushy love scene the night before. For us guys, you need a car chase or blow up something big.

On Wednesday, the closest we got to blowing up stuff was John McCain’s call to declare war on a few dozen countries since everyone is bored with the one we have now. I found myself channel surfing to see if there was something more entertaining than this tired old theme, but all I could find was a civil war documentary. Been there, done that.

By the time I got back to the convention, Condi Rice was providing the inspirational speech of the evening. Condi’s long road to The American Dream is remarkable, even to old cynics and cartoonists. Growing up in George Wallace’s segregated south, her childhood girlfriend murdered by the Ku Klux Klan, she worked her way up the food chain to become the nation’s first black female Secretary of State. Although there were no major accomplishments during her tenure, she did present a much-needed image of diversity for the GOP.

I was going cross-eyed by the time Paul Ryan took the stage. Is it just me, or does he look like a grown up Eddie Munster? (Once again, a cultural stereotype obscures the Big Picture!) Ryan launched into an oratory so filled with inconsistancies that fact-checkers were falling all over themselves trying to document them all. In the end, it looks like the VP debate will be scored by who makes the most gaffs. Will Uncle Joe Biden remember where he is? (“I’d like to thank everyone here in West Caroginia for coming tonight.”) Will Ryan remember what year the GM plant down the street in his own district closed down? (“Obama used a time machine…Yeah, that’s the ticket!”)

I couldn’t take it after the first half hour and looked around for something more relevant. Hey! There’s a South Park episode I haven’t seen. What will that crazy Cartman do next?…

18 Responses to Yes We Con – Day Three: The Voice That Launched A Thousand Search Engines