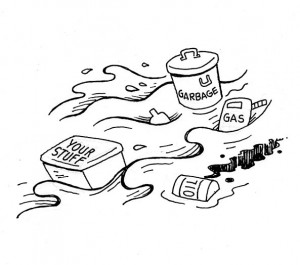 Yesterday afternoon I noticed a TV crew outside on the street. We don’t get a lot of media attention down here in the ravine, so I was naturally curious to see what they were up to. After gathering their equipment, they headed down the street and out of sight. That evening I saw them again on the newscast, and the story was about the flooding of a daycare center a few doors down from us. There were photos of childrens’ toys floating down the creek and the owner’s car under two feet of water. When asked what she had learned from the incident, she said “next time they say it’s going to flood, move your car.” Yeah. Good idea.

Our family has lived on Wolf Creek for over half a century, so when one of these events occurs, we do take it seriously. We’ve learned most of the lessons, the hard way. Same goes for my neighbors on the right. They’ve been here half as long, but also found out that the creek is a harsh mistress when aroused. The neighbor on the left is a newbie. I warned him when he moved in, but he is out of town and left his vehicles in the path of the Wolf. Oops.

At any rate, there are things you should do if you’ve noticed that you live next to running water. Here are a few tips…

First, now that you’ve seen that you are not immune to the whims of Mother Nature, go out and take a look at the ring around your house, car, etc. That’s the high water mark of the recent unpleasantness. Now realize that next time, it might even be higher. If you lived hereabouts in 1997, you’ll recall there was a flood even worse that last week’s. I was in Nevada City then, and the entire plaza was underwater, including the bar in the old Plaza Grocery building just below.

Now that you have an idea how bad things can get, do what you can to mitigate the damage. Put anything that is perishable or has a motor at least two feet higher than the water mark. Secure all containers, even if they are waterproof. During the last flood in ’04, everyone’s garbage cans floated down three addresses, with the garbage intact.

Don’t put your yard debris near the water. The leaves and limbs will move down to your neighbors yard, or create a dam that will make things worse. Sure, you won’t have to rake up your leaves, but you’ll still have to shovel your upstream neighbor’s soggy biomass out of the garage.

The most important thing is to get your vehicle to higher ground, unless your car runs on silt. Collect all containers of whatever toxic chemicals and petroleum products you happen to have lying around. We have enough trouble trying to keep the creek clean.

Living on a floodplain will always be a gamble, but if you prepare for it and heed the warnings of your local government and weather forecasters, you can save yourself and the environment a lot of trouble.