The (Updated) End Of The World 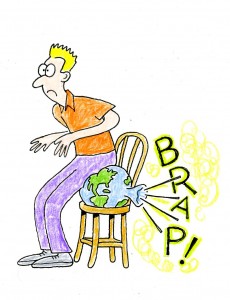 All this week, the TV science pundits have been reassuring us that the world will not end on December 21st. Just when I was about to breathe a sigh of relief, a new study was released that says we may have more to worry about than careening asteroids, such as the one National Geographic and the Discovery Channel has been touting as the dinosaur-killer of 65 million B.C.

The latest theory du jour claims that the mass extinction of the dinosaurs was caused by the Deccan Traps, a region of now-expired volcanoes located near Mumbai, India. The study claims that there was such an abundance of earthborn flatulence during the time in question that the planet was engulfed by a cloud of sulfer and carbon dioxide, snuffing out all sunlight and poisoning the oceans.

This does not bode well for us human-types. We’ve been led to believe that our biggest worry was a big rock or comet striking the earth, and that we have the nuclear means of blowing it out of the sky or at least nudging it away from our little green planet. Now we must consider that the real enemy is under our feet.

The signs are everywhere, especially if you live in California where hot springs dot the landscape. These life-giving springs are evidence of the boiling inferno that exists near the surface, and most are located on active faultlines. It stands to reason that one of these days the internal indigestion will bubble up in the form of a gaseous magma technicolor yawn. Earth barf, if you will.

The worst-case scenario is a major eruption at the Yellowstone super volcano in Wyoming, which would cover the midwest in several feet of ash and blanket the world in a toxic cloud of filth, blotting out the sun for decades. This would be a real bummer for the advocates of solar power. We’ve had it drummed into our noggins that the sun would be our salvation in an energy hungry world. The government is investing billions in research and development, and here in Calitopia we are even required to aim our housing at the Big Star to capture its rays. We’ve put all our eggs in the solar basket, and may discover they are rotten.

Yes, hardly a day goes by without a new claim that efforts to retrieve natural gas by fracking is dangerous to the environment, and nuclear power is too risky to contemplate. Even cow exhaust is threatening our way of life. Wind power was once popular, until bird watchers complained that the big fans were chopping up the avian population. It seems there is no simple solution to the problem.

At least until the experts admit that the real threat is the human population itself. There are just too many of us polluting the world and demanding to be housed, fed and kept warm in winter and cool in summer. Once our governments figure that out, we are in real trouble.

3 Responses to The (Updated) End Of The World