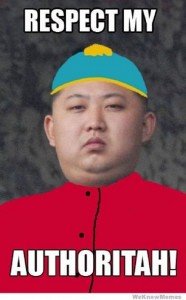 Recent developments in the ongoing war of words between blogger Kim Jff Pun and conservative opponents reached a new level of butt stupid this week. The feud, which has been festering for almost five years, pits the benevolent leader of the Republic of the Sierra Foothills against The Confederation of Workers, Patriots, & Retiree Oligarchs, or COWPRO. It began with a series of anonymous trollers posting false messages on COWPRO blogs, which in turn led to Kim’s threat to expose them all in his upcoming comedy, Jefferson State of Mind.

“I’ll bombard them with personally signed copies,” the Great Leader sneered. “If they don’t respect my boundaries, I’ll follow with volumes of lawsuits.”

The chief mouthpiece (or biggest mouth) of COWPRO, Thudd Joovanilla, issued a rebuttal in his native language: “Stoopd leftee Phn iz a JoKe too uzz. Wee no he yousis fony emale namez. Wee dew nott takke hmm cereiuslee.” He then went into his people’s traditional owl dance, flapping his arms wildly while chanting “HOOT HOOT” in a mocking fashion.  He was joined by the rest of the sandbox sages in a series of witty putdowns and contemptuous comparisons to various types of devils, demons and invertebrates  . Kim responded with his trademark “laughing-my-ass-off-rolling-on-the-floor” acronym, a vision that no one would care to see in reality.

Kim was quick to point out that there was a vast interblogospherical conspiracy to get him, led by a mysterious entity named “trout”, who the dictator believes is an agent of the  military industrial complex, or maybe the Fast Newspaper Cartel. “Trout” transmits his wiseacre remarks from an undisclosed bunker in the suburban jungle of the central valley, leading some to wonder why he cares what we natives do in our own backyard.

The rest of our tiny corner of the world watched the tortured tableau unfold, or at least five or six of them did. Everyone else rolled their eyes at the titanic waste of time and energy and went back to more fruitful endeavors, like watching cute kitty videos on Facebook.

16 Responses to The Inner View