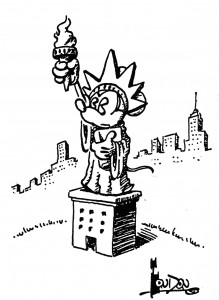 There are many reports of seemingly insane futile gestures in the news these days. In Tibet, a Buddhist monk sets himself on fire to protest the brutal suppression of his religion and culture by the occupying Chinese. It’s about as bold a statement as any human being can make, and unfortunately, the last one for the monk.

In Russia, the three women who comprise the band Pussy Riot have been sentenced to two years in prison for the crime of blasphemy and hooliganism stemming from their impromptu performance inside the Cathedral of Christ the Savior in Moscow last winter. The protest only lasted a few minutes and there was no physical damage to the church, but in Russia such institutions are the property of the state. Therefore it is a crime against the state. Pussy Riot staged the event in protest of Vlad Putin’s announcement that he planned to return to the presidency after eight years of constitutional exile due to term limits. (I daresay there are a few ex-presidents in our country who’d like to do the same, but can’t due to that pesky 22nd amendment.)

The episode reminded me of my own somewhat questionable roots in guerrilla art. Back in 1979, I decided I wanted to be a cartoonist, but was unsure of how to get started. By chance, I ran into Dan O’Neill, Nevada County’s first successful ink-slinger, on the deck of Framastanyl’s (now Cooper’s) bar one evening. It was the beginning of an odyssey that continues to this day.

Dan started his comic strip Odd Bodkins in a now defunct local newspaper called The Nugget back in 1961. After honing his craft for a short time, he moved to the bay area and The San Francisco Chronicle. His strip was an instant hit, and soon was syndicated in over three hundred papers from coast to coast. But Dan’s habit of including politics in his humor was his undoing. One by one, conservative papers dropped him like a hot potato, which is fitting since he is Irish.

After being expunged from even his homebase at the Chron, Dan set his sights on a bigger target: Walt Disney. In a move reminisent of the SLA’s kidnapping of Patty Hearst, Dan and a rag-tag group of cartoonists called The Air Pirates hijacked Mickey, Minnie and a host of other iconic characters and forced them to do drugs and perform sexual acts in two comic books called Air Pirates Funnies. But why?

It was an insane futile gesture, for sure. Walt wasn’t even alive to be outraged, although there were rumors that he had been put into a cryogenic state to be ressurrected when the Disney Imagineers and technology had suffiently advanced enough to accomplish such a feat. Talk about a futile gesture. At any rate, I’ll defer to this account of the story in Reason magazine by Bob Levin. Here’s the link…http://reason.com/archives/2004/12/01/disneys-war-against-the-counte

Some years later, I was living in Seattle and was approached by a publisher of underground (or alternative) comics. He wanted to reprint the Air Pirates stories but wanted a new cover, and since I had been one of the sorcerer O’Neill’s apprentices, he thought I should do the honors. I agreed, with the condition that I could include a new story in the book to carry on the tradition.

And I had a lot to work with. Over the years I had collected news clippings of outrageous behavior by the folks at Diz-co. Stories about how they covered Central Florida in insecticides in their zeal to make Disneyworld a mosquito-free fantasy. How the French farmers blockaded EuroDisney to protest trade agreements. One of the strangest was Disney’s lawsuit to prevent tattoo artists from etching Mickey onto the skin of human beings. I didn’t have room for another story about a daycare center that was sued for painting a mural of Disney characters on the walls of their facility. After the story hit the press, Hanna Barbera sent a team of their artists to the school and painted Huckleberry Hound and Quick Draw McGraw over the crime. Ka-Bong!!!

Our efforts didn’t provoke the ire of the Disney lawyers, and was never done for profit anyway. We gave away copies to our friends, even a few that worked for Disney, and that was it.

In a just society, that’s what would have happened with the Pussy Riot incident. Maybe a slap on the wrist for disturbing the peace, but certainly not two years in the gulag. Hopefully, international outrage will force the Russians to relent. Their reputation is bad enough as it is.

Futile gestures are essential to the life of a free people, even those which are deemed stupid or outrageous. Even those that target our heroes and most revered institutions. As distasteful as they are, even those religious fanatics who protest the funerals of fallen marines. Salman Rushdie opined, “What is freedom of expression? Without the ability to offend, it ceases to exist.” I still prefer the one Dan told me, which he said came to him in a dream.

“I never met a windmill that wasn’t looking for a fight.”