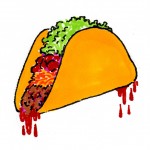 There is a narrow passageway connecting Broad Street to Spring Street just to the left of Cirino’s Restaurant in Nevada City that most of us old timers fondly remember as Duffy’s Alley, from the name of the bar that used to occupy that space. If you happen to be wandering down that route, you may notice a sheet of plywood covering what used to be a doorway into the building. In a more enlightened era, this was the entrance to Taco Joe’s restaurant, a counter and small kitchen where most of us had our first encounter with Mexican cuisine.

This was during the time when grease was still an acceptable part of the daily diet, and Joe’s tacos and enchiladas were brimming with undrained fat. (That’s where all the flavor’s at!) If Joe knew you well enough, he might also take you out back and introduce you to Mexican “tobacco”. Like his food, his smoke was hot and harsh, and left you feeling a little dizzy.

After Duffy’s was sold to Jim Morales and became a full-on bar, Joe moved his business to Neal Street in Grass Valley, but over time he became more interested in spending his time at the bars instead of cooking. His wife used to hunt him down, cursing him in spanish and dragging him home to sleep off his indulgence.

Joe is gone now, but Mexican food is more popular than ever. There is an abundance of hispanic-themed restaurants in the area, and most of them serve excellent food. It should be noted that Jimboy’s Tacos got their start here, and who can forget Casa Gonzalez out on Gracie Road? But I digress…

One of my favorites is a little known lunch truck operated by my friend Carlos. He is a descendant of the first Spanish settlers, and has a little Native American sauce coursing through his menu as well. When he does show up in my neighborhood I make a beeline for his traditional hispanic fare, but yesterday I noticed something different in his demeanor, and his prices.

“Carlos,” I stammered, “when did you raise your prices? I mean, four dollars for a taco? Come on!”He muttered a few expletives in spanish before answering me.

“It’s these new government regulations,” he snarled. “They’re killing me! I’ve had to hire an accountant and an auditor to comply with CARB.”

“What is it? Are they after you because of the smoke coming off of your grill? Did your truck fail the smog test?”

“No,no…It’s the frijoles. They’re telling me that the flatulence they cause in my customers contributes to global warming, or something like that…And my beef providers are passing along the extra cost of their methane-producing cattle. It’s hitting everyone down the line. Then some cities are talking about a “sugar tax” on my soft drinks to combat obesity, and others just want to ban lunch trucks altogether.”

“To make matters worse, the corn shortage caused by the drought and ethanol requirements have doubled the cost of tortillas. I’m screwed, amigo.”

I shrugged and ponied up the four bucks for one of his tacos, but I don’t think I’ll be eating here much anymore. The recession has been hard on everyone’s wallet. There’s talk that CARB, realizing there could be a massive backlash by struggling consumers, is considering exempting many businesses from the bait-and-switch scheme. With a trio of tax increases on the November ballot, it’s no time to start unduly soaking the electorate, although the state is doing it not so subtly with everything from rural fire taxes, (how about an earthquake tax for the coast?) increased fees for everything, a rise in ticket-writing for minor driving infractions by the CHP, etc., etc…

Is it any wonder that us senior citizens pine for the good ol’ days when the air was stinky, but free?..When our representatives were even more crooked than today, but still managed to keep their budgets from causing intestinal bleeding? For many of us, the current trends don’t pass the smell test.

23 Responses to The “Flat” Tax