Burning Down The House

One of my long standing complaints about Nevada City’s planning decisions has been their inability to look at demolitions realistically. They may argue that they are only following the historical preservation ordinance and it is up to the city, not them, to change the rules, but variance exceptions have always been on the table.

Earlier in this century, Tom Staser approached the commission with a request to tear down his mother’s house at the corner of South Pine and Sacramento. The structure was completely rotted and you could put a marble at one end of the house and watch it roll to the other end.

Even so, the commission refused, and likewise his appeal to the city council was denied. After many months of wrangling, it was decided that Staser could remove the house, but only if he kept the wall facing the street intact.

Frustrated, Staser told the city to pound sand, and demolished the house without permission. This led to sanctions from the city, and another year before he was finally allowed to rebuild the home, at great cost. 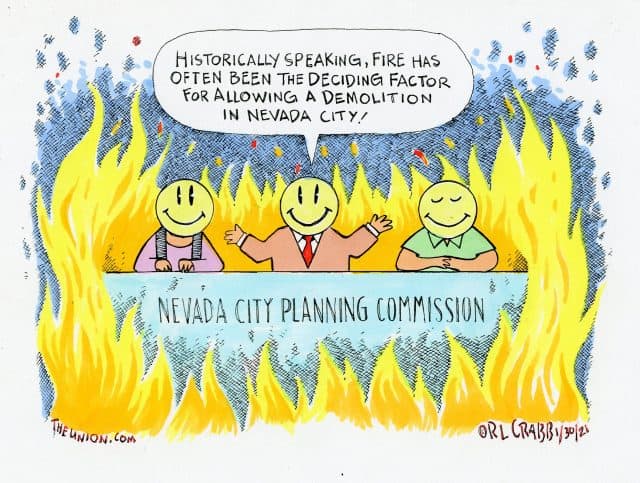 This week, we have seen another instance of the city’s failure to protect the interests of its citizens and infrastructure. Over the years, many have tried to get permission to demolish and replace the house on Broad Street, but were repeatedly denied. The cost of trying to rehabilitate the worthless house was too exorbitant for anyone without money to burn.

By denying the demolition of the house on the city’s main drag, they set the stage for the fire that destroyed not only the house in question, but much of the adjoining building and the business, resulting in losses of hundreds of thousands of dollars. It was fortunate that no one was harmed.

There has always been a double standard when it comes to these decisions. The most recent case is the demolition and rebuilding of the tin sheds that now house KVMR and the Nevada Theater. It’s difficult to believe that the same requirements and variances that allowed the radio station could not have applied to the decrepit structure across the street.

1 Response to Burning Down The House