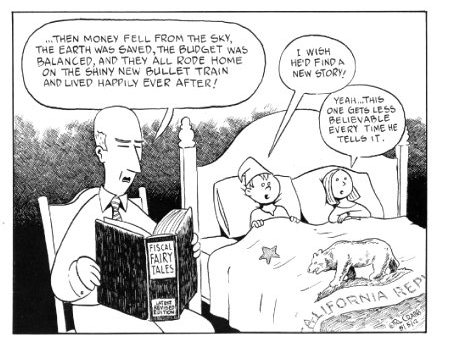 Once upon a time, there was a magical land called California where the sun always shines, the fruit is always sweet, and there’s gold at the end of every rainbow. Dreamers from all over the world once flocked to its sparkling shores to find their fortune.

But there came a time when California fell from grace. The dreamers’ dreams were very big. They wanted to preserve all the wild lands. They wanted to feed and house all the hungry and homeless. They wanted amenities and entitlements. And when it came to time to pay for all the wonderful things, they found that the coffers were empty.

They elected leaders who promised they could fix the dream with magic. They could create wealth out of thin air, just by juggling numbers. The people didn’t realize it was all an illusion until it was too late. Reality was eating away at the dream.

Even then, they could not let go of the fantasy. Every time someone suggested cutting this or that, the people rose up and said “Nay!” So they decided that someone else should pay for their dreams, and the privilege of living in California. The Big Dreamers could afford to share with the rest of the population. But the Big Dreamers had magic of their own and could make their wealth invisible. Many others decided to chase their dreams elsewhere.

Our story ends here for the moment. Why write another chapter that says what’s already been said? Perhaps someday Californians will stop walking and talking in circles, and the story can continue. You’d think with so many dreamers, there would be more imagination.