From Moonshine to Mooning 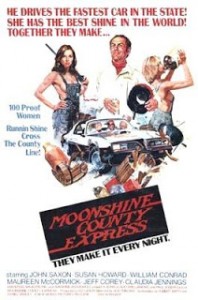 Christmas season is upon us, and soon television viewers will be treated to another rerun of the Hallmark movie The Christmas Card, starring Ed Asner and some other actors whose names I forget.

The Christmas Card has been played up by the local chamber of commerce in their neverending quest to attract tourists to the area, especially during Victorian Christmas. It’s also used as an example of the quaintness of our little storybook village. No scraggly hippies or homeless persons appear anywhere, and the shops and restaurants are all full of smiling friendly folks, ready to help a stranger in need.

It’s not the first movie to be made in NC. There have been many over the decades. The first one I remember was called The Well, starring Harry Morgan. It was a story about racial tensions in the fifties, if you can imagine that in our whitebread county. Most of the movie was filmed in Yuba City, but I vaguely recall some shots of the old Union Building and the outside of Bunce’s bar. It’s a hard one to find nowadays.

The seventies were the salad days of film in Nevada County. There was 1979’s The Incredible Journey of Dr. Meg Laurel, starring Lindsay Wagner as a doctor trying to overcome rural superstitions in the Blue Ridge Mountains. Also featured were Jane (formerly Mrs. Ronald Reagan) Wyman, and James Woods as a sin eater. Also in ’79 was Undercover With The KKK, starring Dandy Don Meredith. My favorite scene from that one was veteran character actor Slim Pickins being shot in his pickup and pushed into the Yuba River canyon at Edward’s Crossing.

But the real highlight of Nevada City’s film history was 1978’s Moonshine County Express, starring John Saxon, William Conrad, (who starred in the TV series Cannon. ) Susan Howard, (of Dallas fame) Maureen McCormick, (You got it!…Marcia!Marcia!Marcia! of The Brady Bunch. ) and a host of character actors including Dub Taylor.

‘Shine, as it was called during filming, was a made-for-drive-ins “B” movie, but actually had a decent script and some hilarious scenes, especially if you knew the locals who were hired as extras and bit players. There was one scene that called for an explosion at The Bargain Barn (on the Nevada City Highway across from Chapa de) that went horribly wrong. The special effects guys misjudged the amount of explosives for the “simulated” destruction of the building and actually did blow up the front of the building. Oops!

Another incident involved McCormick, who was booted out of Duffy’s Success for being underage. (Owner Jim Morales: “I don’t care if you’re a movie star…no ID, no alcohol!”) There was a great scene in the movie of Crazy Horse owner Ray Dalugee fondling Susan Howard, and of course, there are lots of local buildings and businesses featured prominently. (Some good scenes in the OK Pool Hall, now Citizen’s Restaurant, in Grass Valley.) Old timers will also recognize the old Seven Hills School gym as the setting for a dance featuring local musicians Tom and Dink Mantle.

Times have changed since those wild and woolly days. We’ve gone from moonshine and an outlaw image to mooning over lost love in a gentrified white picket fence community in the space of thirty-odd years. The movies do reflect reality, in a strange way.

Here’s a Youtube clip from the movie. In the chase scene you’ll see the Northridge in the background… http://www.youtube.com/watch?v=S2USTuu5QRE

41 Responses to From Moonshine to Mooning