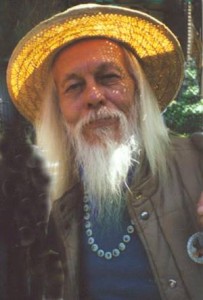 There is a community of kindred spirits who congregate every year at the San Diego Comic Con. I joined back in 1982, when the con was still a relatively minor cultural phenomenon, and was immediately accepted into the ranks of cartoonists, writers, publishers and fans despite my inexperience and lack of any accomplishments.

There were many who helped to mentor me through my infancy, but one that always stood out was George Clayton Johnson.

You may not recognize the name, but chances are you know his works. He was the co-writer of the futuristic novel and movie, Logan’s Run. His original story was the basis of the Rat Pack adventure, Ocean’s Eleven. He was responsible for numerous classic Twilight Zone episodes including A Penny For Your Thoughts, A Game Of Pool, Kick The Can and Nothing In The Dark. He wrote The Man Trap for the original Star Trek series.

He would always seek me out at San Diego to give me his latest signed collection of stories, which I still cherish. And I wasn’t the only one. There are many who count George as a major influence in their careers and lives.

I had hoped to reconnect with him this year, after being absent from the convention scene for far too long, but it was not to be. George passed away last night at the age of eighty-six.

There have been numerous tributes to him on social media, and many have used to his own words to eulogize him. In the episode Nothing In The Dark, an old woman hides away in a crumbling tenement, afraid to leave the building. She has seen death lurking in the shadows. She has watched as he moves through the crowded streets, and seen his cold touch take the unwary to their grave.

No one believes her, and even though she has been served with an eviction notice she refuses to let anyone into her apartment for fear that the deceiver will come for her.

But then she hears a gun fight between a police officer and a criminal. The officer (played by Robert Redford) lies wounded outside her door, begging her to help him. She spurns his request at first, but eventually relents and brings him in from the freezing cold.

And as she feared, he is Mr. Death. As he takes her hand, he comforts her with these words…

You see. No shock. No engulfment. No tearing asunder. What you feared would come like an explosion is like a whisper. What you thought was the end is the beginning.

Best wishes on your new beginning, my friend.