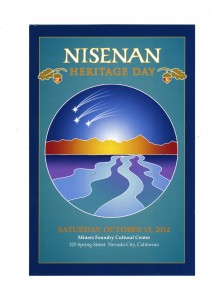 What do you know about the people who lived in Nevada County for thousands of years before the Gold Rush? My guess is not much. When I was growing up in Grass Valley in the fifties, we were told that those people were called the Maidu, and about all we learned was that they ate acorn mush made in the well-worn holes in the rocks we would sometimes find in the woods. This misconception has persisted through the years, even when the county named the street leading to the Rood Center “Maidu Lane” in the nineteen-eighties.

As it turns out, the native people were actually the Nisenan, and had their own distinct culture before they were decimated by the 49ers and those who followed. Their descendants are determined to set the record straight, and have organized the first Nisenan Heritage Day event this Saturday, October 13, at the Miner’s Foundry in Nevada City.  For details, check out their website  http://nevadacityrancheria.org/

11 Responses to Get Indigenous