Here’s Mud In Your Eye 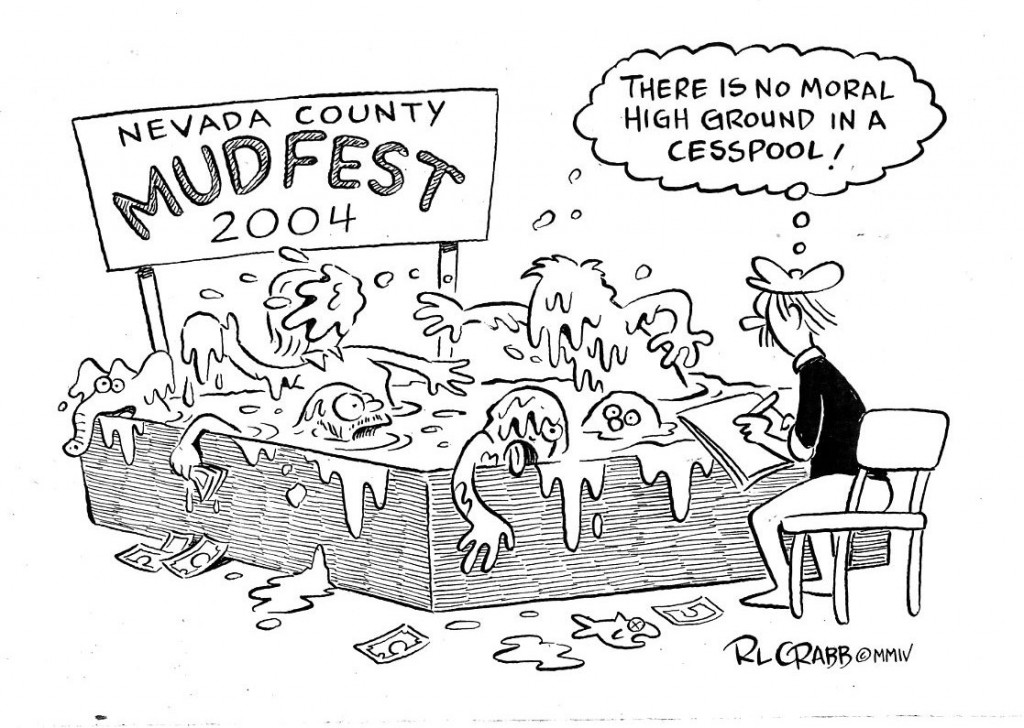 I did this drawing ten years ago, during an era of exceptional rancor in Nevada County politics. Here’s a passage from my chronicle of those ugly times, Once Upon A Village.

“With the election of 2004, a new generation of conservatives assumed control of the Board of Supervisors, but it’s understood that the days of the good ol’ boys, sweetheart deals and rampant development are gone forever. Even if they wanted it, they are constrained by a maze of mandates and regulations from the state. While progressives may not agree with the new majority, they have charted a more moderate course for the future, much to the dismay of their more libertarian supporters.”

Here in 2014, the “moderately conservative” Board has come under fire from all directions. In an ironic twist, property rights activists from the left have taken them to task over marijuana farms and a controversial cell phone tower. The specter of development on Dorsey Drive has many activists up in arms. The right wingers are unhappy that the Board hasn’t weighed in on Agenda 21, global warming fraud and the secessionist movement, among other tea party topics. The progressives, now led by the ever-boisterous Jeff Pelline and his Sierra Foothill Report  (Or sometimes referred to here as The Whine & Cheese Quarterly ) have begun to challenge the status quo, who are still being referred to as the “good ol’ boys.” Mr. P vigorously denies any political leanings, but his slanted reporting on the Grass Valley city council race and Ahabesque vendetta against The Union tells another story.

Compared to 2004, this year’s election is a sleeper. The supervisor’s contests were conducted with a minimum of nastiness, and the moderate right still holds sway in the Rood Center chambers. Still, there is much grumbling from the disaffected left against the Supervisors and Sheriff Keith Royal. It will be interesting to see how the ASA (Americans for Safe Access) initiative does in November. If successful, it could set the stage for a new round of recall elections in 2015. If there is still any water in Nevada County, that’s when the mud pies will fly.

26 Responses to Here’s Mud In Your Eye