Inept Vs. Insane: The End Is Near 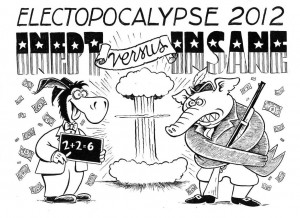 I used to rent a house from Lorraine Andrews back in the eighties. Lorraine was quite a character. She was valedictorian of her class at UC Berkeley, (one of her classmates was Earl Warren) she owned the Lola Montez house in Grass Valley, where she lived for awhile before moving to the Oakland Hills and donating the house to the city. She was a lifelong spinster schoolteacher with very strong opinions about most everything.

She also owned a house in Nevada City that we rented back in those days. (She claimed she bought it on the courthouse steps for $500 during the depression. We offered to double her money but she wouldn’t go for it.) One day in 1984, she called and I answered the phone.

“Do you have a pencil?” she asked. “I want you to take notes.” (This was standard for Lorraine. These one-sided conversations could last for an hour.) I never did take notes, but always humored her and said I did. “Ready? Now I want you to vote for Ronald Reagan.,” she commanded. “You have to vote for Reagan.”

It was a sticky situation. I was still a loyal Democrat back then, but to refuse left open the possibility of eviction, or at the very least a raise in our reasonable rent. “Of course, I’ll vote for Reagan,” I lied. Maybe I was wrong, but seeing how we were talking politics, lying came easy.

Now I would never presume to tell anyone how to vote, but I will tell you my feelings on the subject, and you’ll have to take my word that I’m telling the truth. I don’t expect anyone to follow my advice. It’s up to everyone to make up their own mind, based on their interpretation of the facts.

I don’t vote for Democrats anymore. Living in California has soured me on the party, ever since they tried to screw me out of $450 to register my out-of-state car here in the early nineties. When I had it smogged, the technician told me I shouldn’t have to pay the extortion since my Chevy was built to CA specs in the bay area. Nevertheless, the drones at the DMV got me on a technicality. (The sticker had fallen off the engine.) I didn’t have much money back then, so it really hurt. Fortunately, Republicans sued the state and eventually won. I got my money back almost ten years later, without interest. My relationship with the party has only gotten worse since then. All you have to do is look at the state of state finances to see how badly they manage government. I have no desire to give them any more power (or money) at the federal or state level.

Which leaves us with the Republicans. Give me a break. I like some of their ideas on the economy, but on just about everything else they suck, big time. Their social agenda is something out of the dark ages. Listening to some of the yahoos that are running for the House and Senate makes my skin crawl. Moderate Repubbys tell me, “Oh, we can control them!” Right. Didn’t they say that about some party in Germany back in the last century? I’d vote for my cat before I’d willingly send any of these assholes to Washington or Sacramento to spew their hate and ignorance.

So I’ll be voting third party wherever possible. In the presidential contest, my choice is Libertarian Gary Johnson. I don’t necessarily agree with everything in the Lib platform, (I’m no Ayn Rand zombie) but I do appreciate their dedication to freedom and the Constitution, something the other two parties seem to have forgotten in their zeal to control other people’s lives.

I know that my vote won’t count for much. Everybody knows that Obama has California locked up. But at least when the shit hits the fan, I can say don’t blame me! It sure beats living a lie.

57 Responses to Inept Vs. Insane: The End Is Near