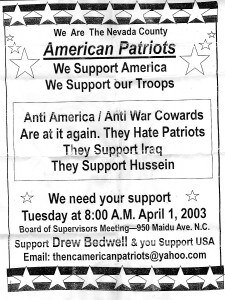 While searching for some artwork, I came across this flyer from 2003. I remember this meeting well. The Board of Supervisors, (Drew Bedwell, Sue Horne, Peter Van Zant, Robin Sutherland and Barbara Green) were asked by representatives of the Green Party to pass a symbolic resolution stating that Congress should vote on any military invasion of Iraq before the Bush administration took any action. Conservatives went ballistic, and organized this effort. The meeting was perhaps the most contentious I’ve ever attended. You could feel the hate emanating from the crowd. I think the wording of the poster says it all.

All these years later, many of those who supported that effort still refuse to admit that the Iraq War was a horrible blunder that cost 4000 American lives and thousands more who have been mentally and physically crippled. The war left such a bad impression on this nation that now, as an even worse enemy seizes power in old Mesopotamia, we are reluctant to get too involved. It is a situation that will have enormous consequences for future generations no matter which course we follow.

As we honor the fallen this Memorial Day, we would do well to remember that we should never blindly enter into such endeavors, and that those who disagree are no less patriotic.