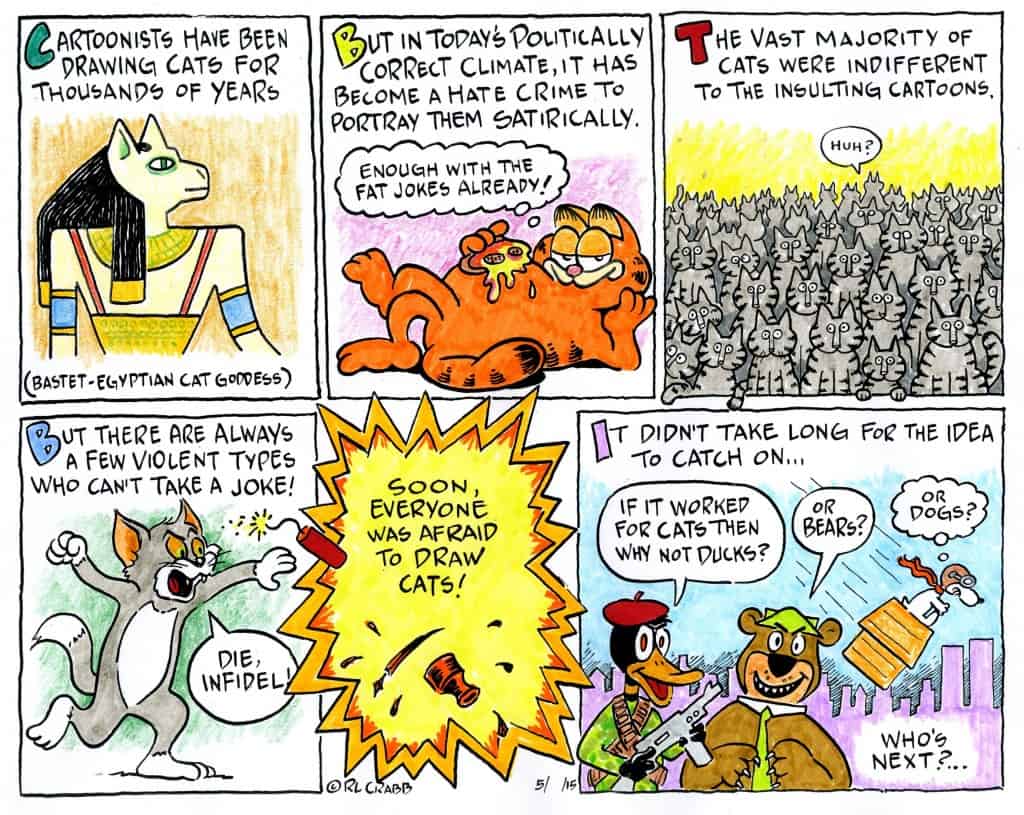 Who’s next, indeed? No one knows what Mohammad looked like, any more than Christians know what Jesus really looked like. We can assume that he had dark hair and a beard, but that’s about as close as you’re going to get. So when a cartoonist draws a picture and says it’s Mohammad, or Jesus, he or she is just guessing. If I draw a potato and call it Mohammad, is that a capital offense?

If a small minority of fanatics can convince the free world that murdering cartoonists for drawing their prophet is at the very least, an understandable act, then what’s stopping the Scientologists from striking a blow for the honor of L. Ron Hubbard? What if a few disaffected Mormons beheaded Trey Parker and Matt Stone for their scandalous Broadway hit, Book of Mormon ? Are we being insensitive by drawing a fat Buddha? Is Brahma a sacred cow?

There are some who claim that satire must evolve with the times. Just as it is now unacceptable to portray blacks as watermelon-eating, fat-lipped slackers, or the hook-nosed, money-grubbing Jew, we are asked to refrain from stereotyping Arabs as towel-headed butchers. (Although someone should tell the Muslim nations that Uncle Sam is not Satan and cartoon animals should not encourage children to become martyrs.) Yeah, we could all use a little evolving.

But the very nature of satire is to ridicule the established order, to break the taboo. There are writers, poets, and cartoonists in the Islamic world who risk imprisonment, torture and death to make fun of the ruling class and their dumb-ass laws and rituals. (There are links to some of their stories in the Cartoonist Under Fire category, and that’s just the tip of the iceberg.) History is overflowing with dead clowns, but their works live on in defiance of time, mocking generations of censors and book burners.

And the satire here, if I have to spell it out, is the absurdity of murdering human beings for the act of drawing a picture or writing a word, and doing it in the name of God. Criticizing religion beliefs is not a hate crime, it is a dissenting opinion. Although all of the above religious institutions have just as much cause to be offended by we heathens, most have given up murder and martyrdom as an incentive to convert.

I did this cartoon in the early summer of 2001, after finding the story in an old speech by Melina Mercouri. It sat around my studio for months, because it didn’t fit the relatively peaceful times we were living in. I finally decided to run it in The Union on the Saturday before the annual Constitution Day parade in Nevada City, September 8. Three days after, and all these years later, it is more relevant than ever.

15 Responses to Who’s Next?