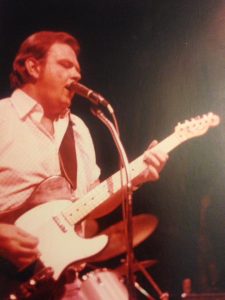 It is with a heavy heart that I must report the passing of Myc James. Without going into detail, Myc had been in poor health for the last year or so. His daughter Rachel has been keeping us informed as he went from living independently to hospice care.

I remember meeting a little fat kid named Mike James back in the seventh grade. He was interested in music, as were most of us during the mid-sixties. He knew I was in a band at the time, and wanted to be part of it.

Some of the other guys weren’t so sure. In those days (or even these days) you had to pass the “cool” test, which was funny since all of us were outcast nerds to begin with. He persisted, though, and managed to get his mom to buy him a cheap drum set. That was a big plus in the cool department.

He had a rough childhood, though. After a fight with his older brother, he decided to run away from home. With a handful of friends as accomplices, we piled into an old station wagon and drove him to the Santa Cruz Mountains, telling our parents we were just hanging out at the river.

His exile didn’t last too long, as I remember, but he had broken bones in his hand which made playing drums difficult, so he switched to guitar. He was the front man/lead singer for the local band Absalom.

After that, we drifted apart as I became part of another group of musicians who left the area for Georgia. There was a rivalry between the bands, and sometimes animosity over writing credits and songs.

Eventually, all was forgiven and I would occasionally run into Myc (who had changed his name from Mike) and I even did a few posters for his new group, The American Dance Band. We had a few other adventures along the way.

By the 90’s, Myc became a solo act, and I’m sorry to say I never saw him perform again. Our encounters became more infrequent, although he commented occasionally on this blog under the name Fatty Jimez.

Rachel has started a Go Fund Me account to help defray his final expenses. I’ll post the link in comments.

Farewell, old friend. You’ve left us with your music and your memory. I will never forget.