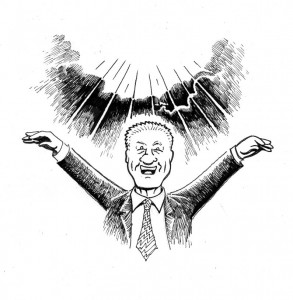 One of the big disappointments of the GOP convention was the cancellation of an address by a hologram of Ronald Reagan. Those who saw it said it was eerily real, so much so that the head honchos squelched it at the last moment. There was the fear that some of the evangelicals might take it as a sign of the Rapture and strip off their clothes as they wait to be carried off to heaven. They also worried that the image of the dear departed leader might diminish the message of this year’s chosen nominee.

The Democrats aren’t as superstitious and trotted out ex-prez Bill Clinton to seal the deal for Obama. Clinton is truly amazing. Part P.T. Barnum, part Elmer Gantry, he was tailor made for the media, perhaps even better than The Great Communicator himself. Even Republicans shower him with adoration when it suits their purpose, and Bubba reciprocates with tales of  the bi-partisan accomplishments he forged with Congress.

And he should love Republicans. It was two Republican Senators from Maine that saved his ass from getting impeached all those years ago.  The rest of them wanted to hoist him on his own petard, so to speak. Their thirst for blood turned off many voters in the ’98 midterms, resulting in election losses and the demise of Speaker Gingrich and Bob Livingston, his chosen successor. (Both ended up admitting to the same indiscretions as Slick Willy.)

No one talks about those trying times now. Big Bill is touted as the only living President to oversee a booming economy and a foreign war without any casualties. He raised taxes and balanced the budget and is the only Democrat to win two terms since Harry Truman. Monica who?

Clinton laid out the Obama record as one that still inspires hope, but  just needs four more years to work out the kinks and make up for the losses caused by Bill’s friends the Republicans. (You know, the ones he bargained with for free trade and less bank regulation.)

Backstage, Obama watched anxiously. It’s not easy to let an old geezer like Bill steal your thunder, but he needs to sell voters on the idea that those golden Clinton years are coming back soon. Real soon.

And thunder has become a problem for Barack. The one embarassing moment of the otherwise perfectly scripted evening came when Obama insisted on restoring one mention of God in the Democratic platform. The crowd booed and in pure Roman fashion gave the Christians the thumbs down, but were overruled by the visibly flustered mayor of Los Angeles. Republicans immediately posted it on Youtube.

Obama, as it turns out, is superstitious. With storm clouds approaching, he canceled Thursday’s big outdoor speech for fear of being struck by lightning from above. You can only tempt fate so far.