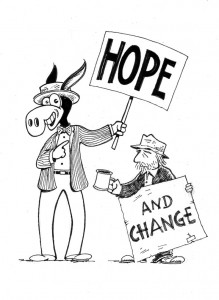 The Democratic  Convention Extravaganza started off with a bang yesterday, with happy warriors from all corners of the nation coming out swinging in defense of the policies and programs of the last four years.

Only the press was more enthusiastic, led by the bombastic Chris Matthews. Matthews is still recovering from the Republic-Con, where he had to be physically restrained from beating delegates with a wiffleball bat. Now in his natural element at the Demo lovefest, he once again exhibited his own brand of “fair and balanced” interviewing by bringing spokespersons of both parties on, lavishing praise on the Democrat and then asking the Republican a stinging question concerning ethics or tactics. Before the hapless guest can utter two words, Matthews launches into the preferred response to his own query, and then spends the rest of the interview deriding the hapless victim and his neanderthalic racist politics. The only moment of weakness for the blond bomber came when the convention honored their dead hero, Teddy Kennedy. The usually unflappable host broke down in tears, clutching at his tingling legs and blubbering incoherently about lost Camelot. MSNBC staffers had to drag him into the bar, where he regained his composure after numerous rounds of Red Bull/Irish whiskey boilermakers.

One of the high points of the evening was the arrival of the Castro brothers…No, not Fidel and Raul, although that’s how it will be reported in the right wing press. These clones are Julian and Joaquim, and seeing them together is rather unsettling. Julian is the mayor of San Antonio and his bro is running for Congress, or maybe it’s the other way around. If they decided to switch jobs, who would know?

All the speakers, including First Lady Michelle, went out of their way to remind the crowd of their accomplishments. What did we give you? Affordable health care! How much will it cost you? Not a dime! (At this point, the once-exhilarated Gen x-y-z voters looked a little concerned, realizing that they will be paying for all those reforms. But then, they realized that they don’t have jobs anyway, which means they will get free coverage. All they have to do is stay unemployed. A win-win for everybody!)

No one brought up the spiraling debt, but it’s assumed that rich people will pick up the tab for some of the bill. For the rest we’ll just borrow more from those Chinese capitalists, who will pay up if they want their prime market to keep the cash flowing. Uncle Ben is tuning up the money presses and hinting at dropping interest rates below zero, meaning that the banks will pay you to borrow money. A parting gift from retiring congressman and financial wizard Barney Frank.

9 Responses to Obamapalooza – Day One: Happy Days Are Here Again