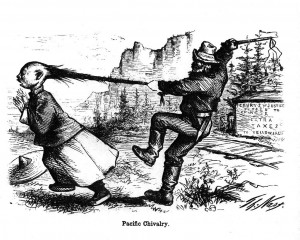 Anyone who knows anything about California history knows that the Chinese were treated abysmally during their first half century in the golden state, as this cartoon by Thomas Nast so vividly illustrates. (Nast was a champion of downtrodden Chinese and Native Americans, but don’t talk to him about Irish Catholics!)

The “Celestials,” as they were sometimes called, were industrious and notoriously cheap labor. They were a threat to white workers who had become the dominant power in California after displacing the Mexicans, who had displaced the Spanish before them, and the Indians, who were virtually wiped out by all of the above.

The Chinese built the transcontinental railroad. You can still see examples of their workmanship all over Nevada County, most notably the rock walls and tunnels at Donner Summit. Every hamlet in California had a Chinatown, until they were driven out by jealous whites. Rather than revolt, they worked harder and kept their complaints to themselves, earning a degree of respect by the time the twentieth century rolled around. And they’ve still been fairly quiet when compared to other minorities, until recently.

That’s when commentator-comedian-faux-republican Stephan Colbert attempted to ridicule Washington Redskins owner Dan Snyder. Snyder, who has come under intense pressure to rename his football team, recently announced the formation of a foundation to aid Native Americans. Colbert announced the creation of “The Ching Chong Ding Dong Foundation for Sensitivity to Orientals or Whatever” on his wildly popular television show, where such absurdities are standard fare.

But when the same wording appeared on twitter, Colbert was accused of blatant in-your-face racism. Immediately the hashtag “#CancelColbert” spread like bird flu through the Internet. Colbert passed the buck onto “someone else” but the fallout continues.

Yeah, sometimes we purveyors of humor push the envelope to new lows. I’ve always been surprised that no one calls liberal icon Bill Mahar on his assertion that Japanese men have dinky dicks and all Asians are bad drivers. It’s a theme he refers to frequently, but I’ve yet to see any blowback.

And just as Chinese-Americans were cornering Colbert, San Francisco State Senator Leland Yee had to come along and steal the headlines. Yee has been tagged by the Federal BI as a corrupt, gun-running gangster, along with supposedly reformed crime boss Raymond “Shrimp Boy” Chow. It’s American Hustle with an Asian cast, and it will no doubt sweep the Oscars ten years from now.

But today there is sorrow in the Chinese community. Even if Yee manages to evade justice, the jokes will flourish and the stereotypes will remain in the smaller minds of the public.