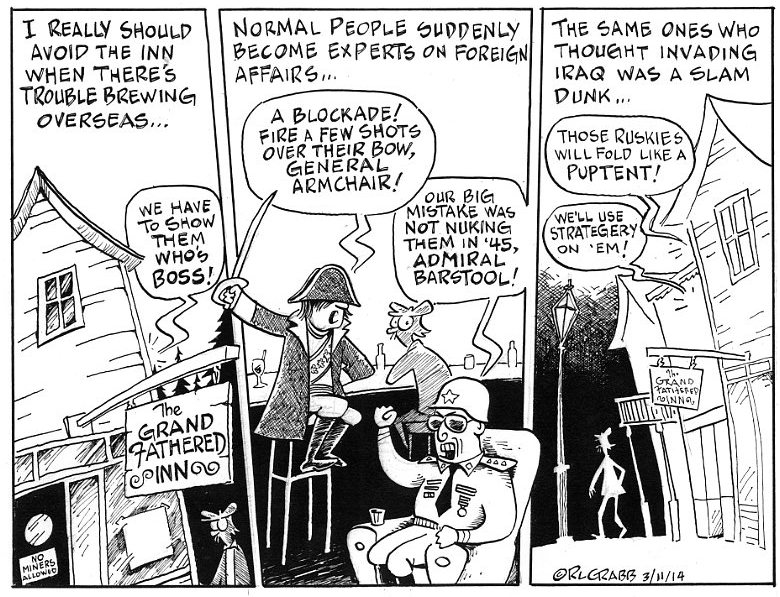 I’m no expert on Russia. I’ve known a few over the years, was even related to one by marriage for awhile, but they are still a mystery to me.

Like most of us western boomers, I was elated when the Soviet Union collapsed. The “evil empire” after all, was the source of our anxieties all the way back to our duck and cover days in elementary school. Even so, I had a lot of respect for the long-suffering Russian people. They managed to overcome crippling poverty and a brutal leader to fight their way to Adolph’s bunker in WWII, and they managed to beat us Yanks in the early rounds of the space race. They were smart and resourceful, considering their handicaps.

So when that wall finally came down, I saw it as the beginning of a golden age. I wasn’t worried about the former eastern bloc nations joining NATO. Heck, I thought Russia would join NATO, seeing how the alliance would benefit both sides economically and strategically. Who could possibly stand against such a juggernaut?

Yeah, so I was among the starry-eyed idealists who believed in the reset. It seemed worth the risks; to prove to our former adversaries that we could all prosper from cooperation and maybe make the world a better place for all humanity. It was a no-brainer.

Unfortunately, Vlad Putin turned out to be the one with no brain, or at least a brain that was still stuck in  illusions of empire: An unrepentant homophobe who sends girls to gulags for a crime that would earn you a $100 ticket and a few hours of community service in the west. And then there’s this business with Ukraine.

Even worse, the majority of the Russian people appear to be on board with this bullshit. Thanks a lot. You’ve just given a whole new generation of Americans a negative stereotype to hang onto for another seventy years or so.

And you’ve given the Cold Warriors another reason to ramp up defense spending; money that could have been used to clean up the toxic mess left over from Cold War I, and maybe feed and clothe the millions of people who still live in wretched poverty and filth in the 21st Century. Instead we’ll get Star Wars and thousands of shiny new nuclear warheads to keep the bear at bay. Such a deal.