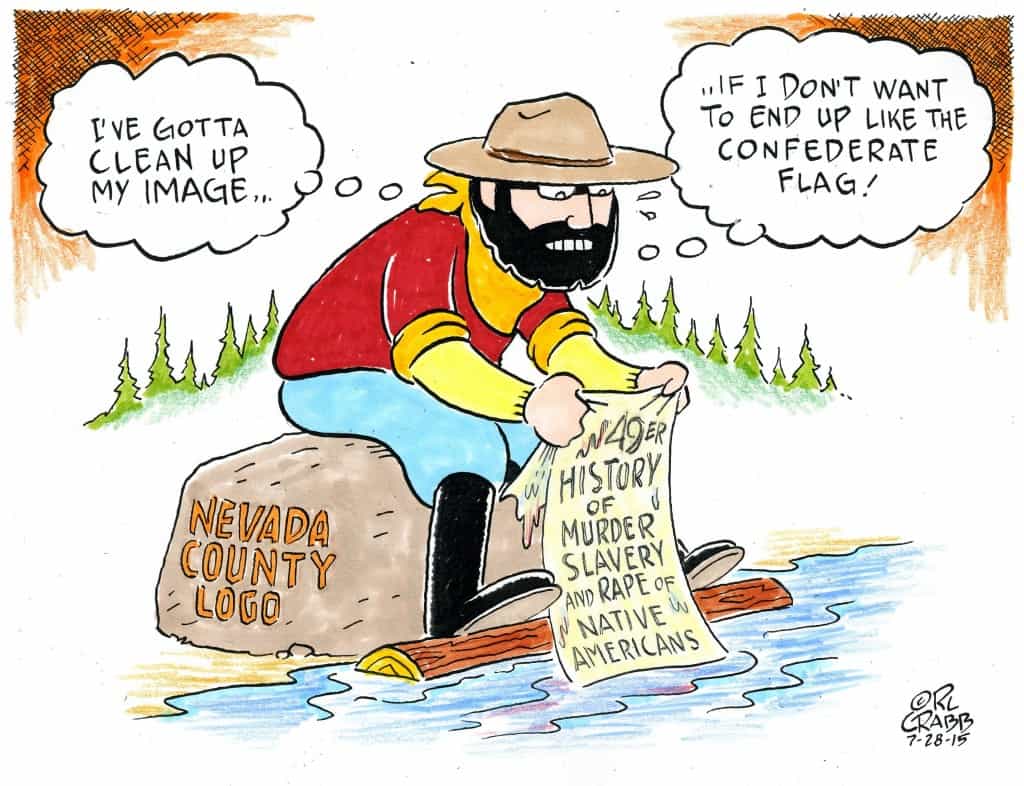 With the current feeding frenzy over the legacy of the confederate flag, it occurred to me that Nevada County has its own problem with the symbols of our history. The gold miner that proudly adorns our county seal is a testament to the brave souls who endured the long sea voyage or overland wagon train to reach the gold fields of California. I’ve used him to represent us in numerous cartoons over the years, the last time being the above illustration regarding the miners’ treatment of the Nisenan, the area’s original inhabitants.

The blowback was swift and sadly, predictable. It was pointed out that the natives weren’t treated any better or worse than the Chinese or any of the other minorities of the period, and that the miners were also victims of theft and murder by the locals.

Well, yeah, but none of those people lived here before the nineteenth century, and none of them had their entire culture systematically wiped from the face of the earth. When you look at the facts surrounding the Nisenan/Maidu history, it’s a miracle that any vestige of it survives today.

Even a quick search of the internet will educate you to the reality of the carnage and injustice heaped upon the local tribes. An early account from Thompson & West recounts an epidemic of smallpox, apparently intentionally introduced by the Hudson Bay Company in 1833:

“A village is mentioned in particular, located on the bank of the Sacramento River at the mouth of the Feather River and there were numerous others on the bank of the latter along nearly the whole length, and a considerable amount on the east bank. The bodies or skeletons were found on the riverbanks and under bushes in the woods, as if the sufferers were endeavoring to protect themselves from the ravages of the pestilence.”

And there is this passage from J.S. Holliday’s Rush To Riches:

“Destroyers of rivers, forests and wildlife, the transient miners were equally blind to the plight of the native people forced to flee their homeland as refugees or to resist as its defenders. These Californians – survivors of Spanish and Mexican domination – sought to escape the horde of new invaders by retreating farther into the hills. But as prospectors extended their relentless searching, followed by hundreds of impatient miners, confrontations were inevitable: Indians shot, miners ambushed, Indian villages raided, women raped, girls kidnapped, retaliations, more killings. As “volunteer militias,” miners on occasion organized Indian-hunting expeditions, which were financed during the late 1850’s with funds paid by the state government for “suppression of Indian hostilities.” Indiscriminate killings and bounties for scalps reflected public approval of whatever means might be used to “exterminate” California’s native people.”

The few Nisenan who survived the invasion eked out a living on the fringes of civilization until, through the efforts of Chief Charlie Cully,  they were granted a small plot of land to call their own on Cement Hill above Nevada City. Alas, even that small acknowledgement was rescinded in 1964 when it was determined that the tribe was not a viable entity.

The degradation continued during the early days of the hippie invasion when the graves of natives were defiled by those seeking nothing more than the stone and bone beads adorning the deceased. In the late 1990’s, Nevada City Councilman Steve Cottrell suggested naming the new street above American Hill in honor of Chief Kelly, to which another councilperson retorted, “I can’t believe we’re naming the street after that old squatter.”

My cartoon was not meant to suggest that we should dump the miner from the county seal, only that we acknowledge that a grave injustice was done to the original inhabitants of our county, an injustice that has yet to be rectified. There may be only a few of us who are directly related to the forty-niners, but we have inherited the land they conquered, and their legacy. Through our actions in the present, we can begin to heal the deep wounds of the past.. The Nisenan will be holding the annual celebration of their culture at Sierra College on November 7. I would encourage anyone who is interested to support their cause, which is to restore the Rancheria and the heritage that was unceremoniously stripped from them fifty years ago.

13 Responses to Past Lives Matter