The smoke from last week’s gunfire had barely dissipated before conspiracy theories began to bloom like magic mushrooms in a fresh cowpie. First, the unedited version of the now-famous scene of the terrorist killing the wounded policeman is making the rounds on the ‘net. Theorists claim the film clearly shows the bullet ricocheting off the sidewalk rather than exploding the head of the victim. That can only mean the cop was offed afterward by the (insert name of organization or government agency here) because he either saw too much or he was killed just to incite hatred of Muslims. We’ve become accustomed to such speculation in the information age and the evidence certainly bears investigating. But until I see Big Foot fleeing from the Charlie Hebdo offices on the back of a robot unicorn, I’ll reserve judgement.

And you do have to wonder what is real, after seeing this wide angle shot of the world leaders marching in solidarity with the grieving public. Oh wait, that’s not the public! It was just their security people, surrounded by soldiers. You can’t really blame them for being a little paranoid after the bloodbath, but whoever decided to make it look like the high potentates were at the head of the parade didn’t do them any favors. (Score one for conspirators.)

Warren Beatty warned us about this shit. You can’t trust your eyes, even with google glasses. As long as we see the world through the lens of the technician/artist, reality is more of an illusion than ever. We used to take drugs to do that.

The cartoonists have been laid to rest, and I had to smile when I saw the photos. Any cartoonist would be proud to go through eternity surrounded by the etchings of his friends and peers. I only hope they filled his pockets with fresh sharpies and a bottle of white-out. 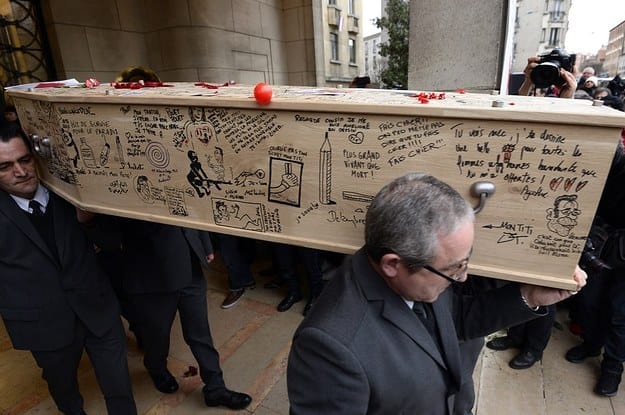 Meanwhile, in the rest of the world, an NAACP office was firebombed in Colorado. Boko Haram murdered an estimated 2000 souls in their continuing reign of terror in Nigeria. In Saudi Arabia, Sheikh Mohammed Saleh Al Munajjid proclaimed that Muslims are forbidden to make snowmen, even if they don’t look like the prophet. The most surprising thing I learned from that story was that snow exists in Saudi Arabia. 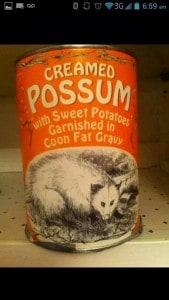 And finally, school officials in Valley, Alabama announced that they would begin to stockpile canned goods, not to feed the poor or even themselves, but to use as weapons in case a gunman should invade the classroom. (The theory being that the terrorist would be so surprised by the assault he would immediately flee the scene or be rendered helpless until the police arrive. ) Talk about your food fight.

Once again, these events illustrate the need for cartoonists in this topsy turvy world. At least for those who can distinguish satire from what passes for reality.

2 Responses to Seeing Is Deceiving