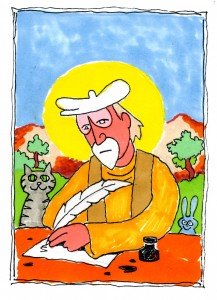 All in all, 2014 has been a good year for me. I received two awards for editorial cartooning, was recognized by my peers for promoting my Cornish heritage, and I published a 192 page book that I started twenty-odd years ago.

I attribute some of my success to longevity. Just surviving the slings and arrows of life’s misfortunes is quite an accomplishment. So many of my talented friends cashed their chips too early to make much of an impression on the world. I’m still amazed that I’ve somehow managed to stay alive this long, given the abuse I’ve subjected my mind and body to in sixty-four years.

In some people’s eyes, that makes me a wise village elder, while in others I’m just another Good Ol’ Boy who’s past his prime and should just shut his yap and shuffle off to the Soylent Greens Retirement Village.

And some folks think I have already left this earthly existence. Just recently, I was made aware of the following passage on an internet site called “Nevada County Scooper”….

Patron Saint: The late R.L.(Bob) Crabb, RIP, a genius among all the grumpy old men. We miss him dearly.

As if I didn’t have enough responsibility, now I have to act like a saint. I decided that I should bone up on sainthood, so I started off with Saint Genesius, patron saint of actors, clowns, comedians, and stenographers (?) among other dubious professions. Genesius  himself was an actor who liked to ridicule Christianity. While performing for the Roman emperor Diocletian, he acted out a fake baptism, which backfired on him when an angel appeared (presumably, only to him) and convinced him to convert. Diocletian was not amused, and sent him off to the torture chambers where he was eventually beheaded.

And unfortunately, losing one’s head seems to be a common fate for saintliness, along with burning at the stake, hot pokers in the eyes, being eaten alive by wild animals, and other bodily violations. When Saint Pete remarked that he didn’t deserve to be crucified like Jesus, the Romans accommodated his wishes by nailing him upside down. Those Romans had a wicked sense of humor.

I’ve already got a good head start on martyrdom. My decidedly unorthodox political beliefs put me at odds with both progressives and conservatives. One of these days, I’ll no doubt enrage one or both of them to the point of violence, or banishment to a cave on an island where I can spend the rest of my life working on a sequel to the Book of Revelations.

In the meantime, I’ll just continue doing what I’ve always been doing; writing and illustrating blasphemy for the enjoyment of the masses. Don’t expect any miracles or healings or world peace. Hell, I can’t even pick any good lottery numbers.