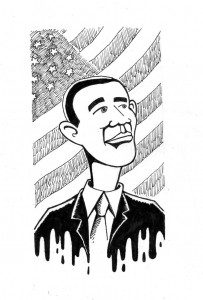 What is it about second terms that tends to upend the Presidency? It seems that no one is immune, at least for those who followed FDR’s unprecedented four terms. Truman had the Red Scare and the floundering Korean Conflict. Ike had his U2 crash. Kennedy’s martyrdom saved him from embarrassing scandals, at least for a few years after his assassination. Johnson had Vietnam. Nixon. Carter screwed the pooch before he could fuck up a second term. Reagan was finally forced to admit that having the grinning Ollie North shredding Iran/Contra documents in the White House basement was a mistake. Bush 41 fell asleep at the wheel before he could develop any major screw-ups. Clinton was proven to be the sexual predator his critics said he was. Bush 43 presided over the biggest financial crisis since the Not-so-great Depression.

And now Barry, only five months into his landslide reelection, finds himself surrounded by scandalous behavior, and they all seem to have dropped into his lap in a matter of weeks. Some folks dismiss Benghazi. I’ll withhold judgement on that until more facts present themselves. But now comes the IRS targeting political enemies, the Dept. of Justice snooping on reporters, a ham-handed attempt to recruit Russian spies by a diplomat in Russia. It was painful to watch Jay Carney getting hit by one pie after another at the last press conference.

Perhaps the problem is the second term itself. Most of the above scandals were germinated in the first terms of presidents. Once out of office, an ex-president can hole up in his bunker and weather the storm by learning to paint or rewriting his history for big bucks. It’s the elder statesman syndrome.

If I remember correctly, LBJ suggested that it might be better to have our presidents serve one six year term and eliminate the those messy and expensive reelection campaigns. Would it eliminate the curse? I don’t know, but the present system seems to follow a predictable pattern.

62 Responses to The Second Term Curse