Looks like the gloves have come off in our little burg’s battle over Terazzo lighting. Former mayor Reinette Senum publicly called out former mayor/planning commissioner Laurie Oberholtzer on Facebook last night, accusing her of pulling strings to bring the lights down.

It brought tears to the eyes of this old cartoonist. I spent many an evening at Nevada City Planning Commission meetings chronicling the abuses of that body on the fair citizens of Nevada City. While my cartoons shed some light on the torture chamber, it did little to actually change the policies that governed the hysterical district. 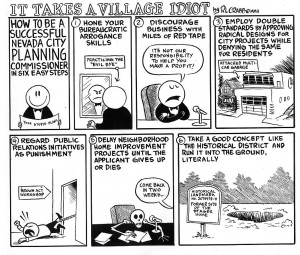 Twelve years later, it appears that Ms. Oberholzter still has her fingers in the pie, despite being officially “retired” from municipal politics. The lights, and especially the boardwalk, have been burrs under the saddle of the Good Old Persons for the last few years. They see it as an erosion of the standards set by the original ordinance back in the nineteen sixties, which they claim can result in the town losing its favored status. 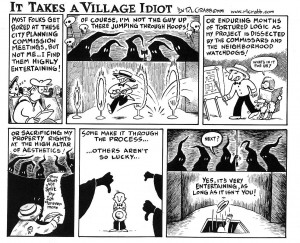 Yeah, well, life goes on, and change happens. Nevada City was never meant to be a museum. The challenges of the young new century demand new ideas if we want to keep the tourists coming. No one wants to see the town turned into a glorified mall, and everyone appreciates the efforts of Laurie, Conley Weaver and others to keep the gaslights burning, but we could really use an infusion of creativity. There are too many empty storefronts on Broad Street these days.

I wouldn’t put all of the blame on city policies, though. I still maintain that Sacramento is the biggest culprit holding us back. But one battle at a time…

18 Responses to Trouble In Terazzo Town