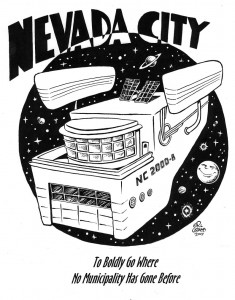 These are trying times. The world economy is convulsing, the state is experiencing a prolonged and potentially devastating drought, the 49ers didn’t make it to the Superbowl, and there are some curmudgeonly types who want to see the Commercial Street boardwalk take a walk. (Walk the plank?)  Conversely, there is a dedicated group that would no doubt chain themselves to the redwood deck before they’d allow its removal.

Such is the state of Nevada City, following a long tradition of bickering over any kind of change. Most of the original preservationists from the sixties have since moved on to the Great Historical District In The Sky, and the second generation is on its last legs. The Millennigen-x-ials are feeling their organic oats, and plan to remake the city in their own image.

And why not? It’s their turn, although they they seem to be in a damn big hurry to push the elders out the door, or down the steps.

And that’s what it’s all about. History is being abused. There has never been a structure remotely resembling the boardwalk on that stretch of Commercial. It is… new! It is blasphemy! In a town where citizens will spend hours arguing about replacing a window frame and what color it must’ve been in 1884, something as visually shocking as a boardwalk in the middle of town has caused many sleepless nights among the historical puritans.

I know what it’s like. As I mentioned in another post, I was a shill for Wiley’s Bar (now Cooper’s) back in the roaring nineties. Dave Parker had the audacity to paint a colorful mural on the courtyard wall. The village government went bonkers, but the bar owner was a stubborn man and refused to remove the offending painting. (And I must remind you that the mural was not even facing the street and behind a wrought-iron fence.) I wrote a scathing editorial, denouncing members of the planning commission, along with ugly illustrations to drive the point home.

When the bar changed hands, the incoming business permit stipulated that Parker’s masterpiece be purged once and for all. Change was averted, and the neighborhood returned to its relative tranquility, until the arrival of the boardwalk.

I doubt that the boardwalk will be leaving anytime soon, just like there will be a new building on bridge Street with a radio tower that was never a part of our local history, and those Robinson buildings on Union Street that replaced a not-so-historic gas station. Given time, they will become history, until Generation Z.2 decides to replace them with replicas of 1970’s architecture. Everything that’s old will be new again.

7 Responses to Under The Boardwalk